Nigeria is the most populated country in Africa, with about 52 percent of its inhabitants living in cities. This is due to the fact that the majority of the country’s population is relocating to cities for one reason: a better life. 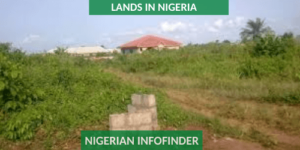 Lagos is Nigeria’s fastest expanding economy, with over 15 million citizens who appear to be growing by the day. As a result, Lagos has become a centre for business, rapid expansion, development, and investment.

Now that your eyes have been opened, I will reveal the cheapest locations in Lagos to buy a plot of land.

In this article, I will highlight some of the greatest sites in Lagos State to acquire affordable land.

Before we get into that, here are a few things to keep in mind before purchasing land in Lagos State.

Before purchasing land, keep the following in mind:

Ikorodu is unquestionably the most popular town and one of the Best Places To Buy Cheap Lands in Lagos, with prices ranging from 600,000 to one million naira. Ikorodu is still a developing town, thus you may get cheap land there. You can still buy a plot of land in Ikorodu for between 600,000 and 1,000,000 in places like Ijede, Igbogbo, Ogijo, Imota, Imowonla, Igberigbe, Igbolomu, and Isawo.

Amukoko, a town in the Ajeromi-Ifelodun Local Government Area, is another place where you can get some of the best land deals in Lagos. There are many available lots for sale, and all of them are reasonably priced.

You can visit this location to witness for yourself that there are still lands for sale in Ojo Road, Imam, Oja, Alaba, Tejumola, and Turner for as little as 750,000 to 1,300,000.

Agbowa is another rapidly rising Lagos suburb where you can get decent and reasonably priced land. Undeveloped areas include Aba-Onigbagbo, Aba-Oriyanrin, AbijoAbomiti, Abosioto, Abule, and Ijesha. The Lagos State Government has big ambitions for the Agbowa corridor. The state government of Lagos has completed 90% of a 1000-unit housing estate project.

Along that axis, the government is likewise proposing enormous infrastructural development. This is the time to position yourself to profit. A plot of land might cost anything between 500,000 and 900,000 naira. Some are even offered in a good area for N450,000. Property values from N1 million and above might double in two years.

Countless construction projects are currently happening in this neighbourhood, including roads, estates, infrastructure such as power, and numerous other developments, making Agbado one of the Best Places To Buy Cheap Lands in Lagos. A block of land can be bought for as little as 900,000 naira. Areas in Agbado that have yet to be sold include Abule Ekun, Oremerin, Ijaiye, Adiyan Ibaragun, Oluwo, Abule Ekun Olambe, Akera, and Ishaga.

This is one of the few areas in Lagos, Nigeria, where a plot of land can be purchased for less than N1.5 million. We all know that Eti-Osa is a fast expanding area with highly rich soil that can support up to six-story buildings. Land is cheap at Sangotedo Town, Unity, Cooperative Villa, Badore, and areas of Obalende. These grounds are free of erosion and so appropriate for building.

Ijegun, which is located in Alimosho Local Government Area, is another location where you can just buy a plot of land for a modest price. Swamps and canals abound in areas like as Isheri-Osun, Alimosho, White Sand, and Fagbile, making land in Ijegun as little as 600,000 per piece. Some properties are only cheap because they are in swampy areas, which means you’ll have to spend money sand-filling your site before you can build a decent foundation.

Badagry is also known in Lagos for its cheap land. Before purchasing land in Badagry, exercise caution because it is said that this is where fraudsters operate. You don’t want to lose over two million naira on a piece of land that already belongs to the government, as most properties in Badagry are considered to be government-owned.

Of course, Apapa’s appearance on this list is shocking. Apapa is a posh area, as you might think. However, this is not the case! Not all of Apapa is very expensive. Land can be bought for as little as three million naira. Only in Coconut, Ajegunle, Kirikiri, Wema, and Tincan is this possible.

Akute is one of the best places in Lagos to buy cheap land. The shopkeeper is reasonable as well as patronising. Akute offers a varied choice of land for sale at a fair price in a fast-developing area. Land is reasonably priced in regions such as Ojudu Berger, Ojokoro, Ijoko, and Ibafo.

Alaba is a well-known business neighbourhood in Lagos state, and owners here offer extremely low rent. Land in Ojo Alaba is being sold in large quantities, so now is a wonderful time to invest. Low-cost housing is well known in Ajangbadi Ikemba, Alaba, Ira, and Ojo.

Epe is a Local Government Area located on the northern side of the Lekki Lagoon, with a population of 181,409 (2006); it is one of the best places in Lagos. You may be sceptical, but I guarantee you that Epe is not the worst place in Nigeria to buy land.

Epe, like Surulere, is well-connected to other areas of Lagos, including Lekki, Lagos Island, Festac, Oshodi, and Surulere. Epe has recently seen considerable development due to its proximity to Lekki.

Epe, unlike most other areas in Lagos, can accommodate both high-income earners and common inhabitants.