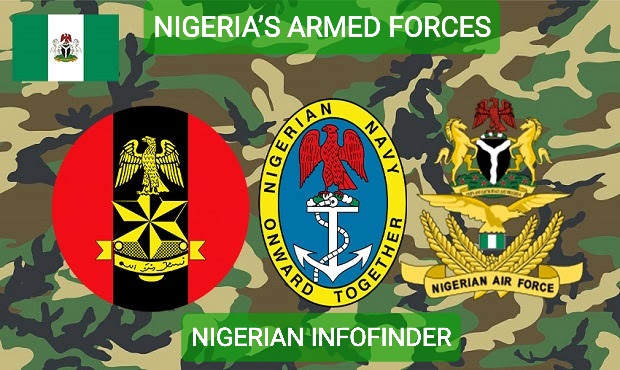 AN OVERVIEW OF THE NIGERIAN ARMED FORCES

The military or armed forces is basically a government-organized force tasked with protecting and defending the country from both internal and external threats. During a battle, they normally go full throttle. They have the authority to use lethal weapons to defend and support the state.

Military officers have received extensive combat and war training. They are also well-versed in martial arts. In Nigeria’s military, there are three key armed services. The Navy, Army, and Air Force are the three branches of the military. Following the country’s independence in 1960, these military forces were officially established. Up to this point, the Nigerian military has only been involved in one war, the Nigerian Civil War, which began in 1967.

To defeat the Biafran Army, the Nigerian military’s three branches joined forces. Since the inception of the Nigerian military, they’ve only been involved in maintaining peace during insurgencies both inside and outside the country. They fought militants from the Niger-Delta, Boko Haram rebels, and, most recently, Fulani herdsmen.

Moreover, Nigerian troops have also been deployed to other UN and ECOWAS countries for peacekeeping missions, such as the ECOMOG.

FULL LIST OF ARMED FORCES IN NIGERIA AND THEIR ROLES

After we have given you a picture of what  We will now focus on the Nigerian military’s armed forces. The following is a full list of the armed forces in Nigeria and their respective responsibilities.

The Nigerian Army is the division of the Nigerian military responsible for land warfare. All through civil upheaval, they defend the country. This component of the military was regarded as one of Africa’s most powerful. When necessary, the Army also provides assistance to paramilitary forces. The Nigerian Army is led by the Chief of Army Staff, who is in charge of the army’s operations.

The Nigerian Army used to be regarded as the foremost in Africa, but that is no longer the case, owing to its inaction and strategy in combating Boko Haram insurgents and Fulani ranchers.

The Nigerian Army has participated in a number of accomplished peacekeeping operations, including those in Sierra Leone and Liberia.

The Nigerian Airforce is a branch of the Nigerian military assigned to protect the country from the air. They call themselves the Lords of the Air. They are mostly in charge of airlifting the Army of the Country to and from battle. The Air Force protects the country against aerial attacks. They provide the Navy and the Army with the required reinforcement and assistance.

Several airline defense activities have been carried out by the Nigerian Airforce. Their contribution in the 1961 peacekeeping missions in Congo and Tanzania is noteworthy. Airlifting the Army to the tours necessitated the use of well-trained Airmen. The Air Force was formed as a result of this.

Since then, the Nigerian Airforce has been at the spearhead of safeguarding the country’s airspace. They have aided the Army in a variety of areas, including troop airlifting, combat operations, and the deployment of specialist weapons. The Nigerian Airforce’s first mission was to fight in the Nigerian civil war, which lasted from 1967 to 1970.

The Nigerian Navy is the military branch of the country that is in command of water combat. They guard Nigerian waterway area, patrol the waterways to prevent crime, and guarantee that crude oil is delivered and shipped safely. The Nigerian Navy was founded during the colonial period. Under the marine military, they were known as the Royal Navy.

They then joined arms with Cameroon to fight the Germans during World War I. They were granted full authority to function as the Nigerian Navy after independence. They bolstered their capabilities by training and recruiting fresh troops.

The Nigerian Navy supports the Army’s efforts. As during Civil War, this was particularly evident. They made certain that the seaways were safe. They prevented the Biafran Army from bringing weapons into the country via the waterways. In Port Harcourt, Calabar, Warri, and Lagos, they grabbed control of the key seaports.

The Nigerian Navy has been involved in a number of security operations over the years. They guarantee that the waterways are safe for oil exploration, fight sea robbers, and prevent the illicit entry and shipment of weapons into the country.

Let’s wrap up this write-up on the rundown of armed forces in Nigeria and their roles. In the course of this write-up, we specifically highlighted these security agencies and their respective roles and functions in safeguarding the Nigerian citizens.

Moreover, the Nigerian Armed Forces play a critical part in the growth of the country. The value of security cannot be overstated. Insecurity and insurgency hamper the country’s development and expansion. In essence, it’s not really an oversimplification to claim that the protection of persons and livelihoods is directly proportionate to the levels of progress of any town, state, or nation. The existence of heavy security motivates people to participate in development-oriented activities. The pace of growth is slowed by military conflict and instability.

That’s the length of this article. We believe you now have a picture of the military or armed forces and the respective roles they play in securing the country.