Nigerians love to do sports, and football is their primary sport of choice. Stadiums and venues are crucial when it comes to football. By building new large stadiums, the nation is also attempting to fulfill the highest international standards for athletic facilities. There are numerous debates on a regular basis about which Nigerian stadium is the finest and largest among Nigerians in terms of capacity. To resolve debates of this nature over the nation’s best stadium according to international standards, this article was put together. Without giving it much thought, let’s look at the top 10 largest sporting facilities in the country. 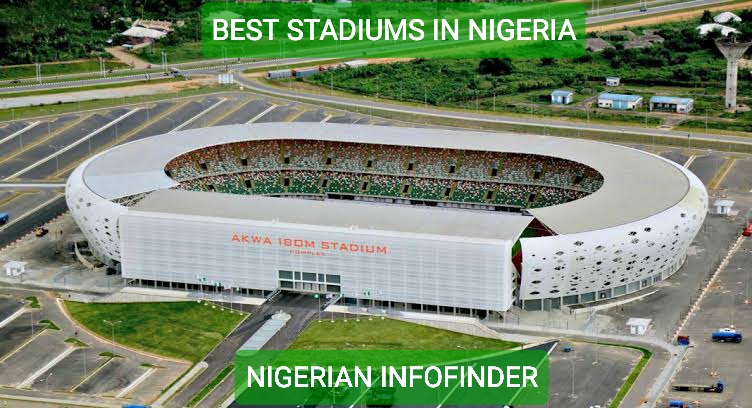 The best sporting venues in the nation and their capacity are listed below.

The Akwa Ibom International Stadium is undoubtedly the best stadium in Nigeria right now and one of the top on the entire African continent. This stadium can hold 30,000 people in capacity and is used for more than just athletic events. There are also other non-sporting events held there, such as social, cultural, and religious gatherings.

The Julius Berger Construction company was given the construction contract for this stadium in 2012, and the facility opened its doors in 2014. The Akwa Ibom state government would allegedly spend roughly $96 million on this project.

The Nigerian Super Eagles Team and Akwa United FC currently call the Akwa Ibom Stadium home. The ultra-modern, versatile stadium with 30,000 seats was fashioned after the Allianz Arena in Germany.

Abuja is home to the Moshood Abiola National Stadium, a multipurpose national sports facility. All National Football Teams presently call the stadium their home field. It was opened in 2003 and can accommodate 60,491 people in capacity. Currently, this stadium is the biggest in all of Nigeria. It was built to serve as the venue for the 8th All Africa Games, which were held in October 2003.

Construction of the Moshood Abiola National Stadium in Abuja is said to have cost a staggering $360 million. It ranks among the top 50 most expensive stadiums ever constructed.

Teslim Balogun Stadium has a seating capacity of 25,000 people in capacity making it one of the smallest stadiums in the country. The Lagos State government built, finished, and delivered the sports complex. It bears Teslim Balogun’s name, a former Nigerian professional footballer who played in the Nigeria Professional Football League.

Regarding amenities, Teslim Balogun Stadium is considered to be one of Nigeria’s top stadiums. In Surulere, Lagos State, Nigeria, is where the sports arena is situated. The Nigerian national rugby league team plays their home games in this stadium, which also hosts certain international football games. The stadium hosts more than just athletic events because it is a multipurpose sporting complex.

The Nnamdi Azikiwe Stadium doubles as a multifunctional center for sports. The medium-sized sports complex is situated in Nigeria’s Enugu. It is primarily used for football games and is home to Enugu Rangers F.C. of the Nigerian Professional Football League.

There are now 22,000 seats available in the Enugu stadium. It was given the name Nnamdi Azikiwe in honor of the first president of the Nigerian Republic, who was also a local. The stadium opened in 1959 and underwent an upgrade and renovation in 1986.

Azikiwe Stadium is rated as the fourth-best stadium in Nigeria overall.

The multipurpose U. J. Esuene Stadium is situated in Calabar, the state capital of Cross River. It was formally inaugurated in 1997 and can accommodate a capacity of about 16,000 people at one time.

Since its opening in 1977, U. J. Esuene Stadium has been the home field of Calabar Rovers of the Nigeria National League. Dolphins F.C. previously occupied the stadium (Port Harcourt). It is considered one of the top stadiums in Africa and the fifth finest stadium in Nigeria.

A multifunctional athletic facility is the Yakubu Gowon Stadium (formerly known as Liberation Stadium). In Nigeria’s Rivers State, in Port Harcourt City, is where the sports arena is situated. It is mostly used for football games and is the home field of Dolphins F.C.’s Nigerian Professional Football League team, Rivers United F.C.

Aba Township Stadium was changed to Enyimba International Stadium in 2002. This was done in recognition of Enyimba F.C.’s victory in the 2002 CAF Champions League. The venue currently contains 16,000 seats, including a designated VIP viewing area.

Enyimba Stadium, one of Nigeria’s biggest stadiums, is currently rated as the country’s seventh greatest stadium.

A multi-use stadium called the Sani Abacha Stadium is situated in Kano, Kano State. Currently, athletic events and football games are the two main uses of the sports arena. It serves as the current home field for Kano Pillars FC. With a VIP viewing section included, it has a seating capacity of more than 16,000 people.

The Nigerian Federal Government, which was in power at the time, inaugurated this stadium in 1982. Numerous major events have taken place there, including the FIFA U-17 World Cup in 2009 and the 2000 African Cup of Nations.

One of the important stadiums in Western Africa and currently regarded as Nigeria’s eighth largest stadium is Kano’s Sani Abacha Stadium.

It is utilized for sporting, cultural, social, and other activities and has a current capacity of 22,000 people. The 2018 African Championships in Athletics were held in the stadium.

Whenever it pertains to amenities for athletes and seating capacity, the Stephen Keshi Stadium ranks among the best in Nigeria. On this ranking of the top stadiums in Nigeria, it is shown as being at position nine.

A common nickname for the Samuel Ogbemudia Stadium is “Ogbe” Stadium. This multipurpose athletic facility is situated in Edo State’s capital city of Benin. It is named after Dr. Samuel Ogbemudia, a two-term governor of the former Bendel State, and now has a seating capacity of 20,000.