Court Marriage, also known as Legal Marriage, is the legalization of a marriage between two persons who have agreed to live together as Husband and Wife. A Court Marriage is also defined as a marriage performed in the Court Registry. 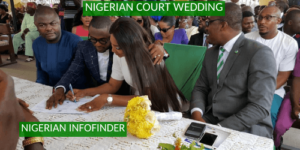 The following are the significance and advantages of having a Court Marriage:

One of the advantages of court marriage is that it is completed quickly. A Court Marriage ceremony is usually brief. It could take only 30 minutes or up to 1 hour and 30 minutes. This is extremely hurried in comparison to traditional marriage or other types of marriage in Nigeria, which normally take a long time to celebrate.

In Nigeria, court marriage is the least demanding type of marriage. In a Court Marriage, you do not need to devote as much time and effort to wedding planning. A Court Marriage also has a limited number of guests, as opposed to a Traditional Marriage, which can fit a whole village; even those who do not know you will come to rejoice with you on your wedding day. As a result, you must arrange to accommodate a large number of guests, which is stressful.

Court Marriage saves money because it is the least expensive type of marriage in Nigeria. The registration and payment of the necessary forms for the marriage do not exceed ₦30,000. Furthermore, unlike other types of marriage, you do not need to spend money on planning the Court Marriage, which requires you to obtain a place, decorate the venue, hire a music band, and purchase other equipment and materials for the Marriage ceremony.

Another well-known benefit of a Court Marriage is the flexibility in the clothing code. This means that there is no set dress code for a Court Marriage. As a result, you can wear whatever you like or what pleases you, which will save you the stress of wearing something you don’t like because it’s the dress code or the cost of borrowing, hiring, or purchasing a new dress, especially for the wedding.

The following is a step-by-step guide to legally marrying in Nigeria:

To begin, parties who desire to marry as husband and wife must give a Notice of Intention to a Registry of their choice.

Thus, if you want to marry in Nigeria, you can go to any Registry of your choice and have a form of notice of your planned marriage issued to you by the Registrar of the Registry where your marriage is to take place.

When you acquire this form from the Registrar, you must fill it out correctly, sign it, and send it to the Registrar along with two colored passport photographs.

When your Notice of Marriage expires, you must pay the Registry of Marriage’s stipulated fee. After paying the necessary price, you must submit an affidavit stating that:

By Customary Law, neither of the parties to the intended Marriage is Married to anybody other than the person with whom such marriage is supposed to be contracted.

These conditions must be included in and satisfied by, an affidavit made before the Registrar, an Administrative Officer, or a registered minister of religion. The penalty for lying on oath or breaching any of the regulations will be explained to you during the course of swearing this Affidavit.

Once the aforementioned steps have been completed, the Minister, upon receiving proof that there is no legal impediment to your proposed marriage and that the necessary consent to the marriage has been obtained, shall forego the giving of notice and issuance of the Registrar’s Certificate, and grant his License known as Form.

A caveat is a warning that forbids someone from committing an act. Caveat refers to the opposition to an intended marriage in this context. This is done by any person who has or knows of any Just Cause why he or she believes the intended Marriage should not take place, by filing a Caveat against the issue of the Registrar’s certificate, as provided for in Section 14 of the Marriage Act 1914.

When a Caveat is filed against the issuing of a Certificate, the Registrar refers the matter to a Judge of the State High Court, who summons the parties to the intended marriage and the person who filed the Caveat to appear in Court. The Judge will order the individual who filed the Caveat to provide justification for why the Registrar should not issue his Certificate.

If no just cause is presented, or if the Judge decides that the Certificate should be issued, he must remove the Caveat by replacing the phrase “Forbidden” in the Marriage Notice with the words “Canceled by decision of the High Court,” and signing his name. The Registrar will then issue his certificate, and the Marriage will proceed as if the Caveat had not been recorded.

When the legal authority is granted by the Registrar, Minister, and the High Court in the case of a Caveat, the parties to the intended marriage must select a wedding date that is within three months of the date the notification was filed with the Registry.

According to Section 21 of the Marriage Act, the parties to the intended marriage should celebrate the marriage in any licensed place of Worship by any recognized minister of the church in accordance with the Church’s rituals of Marriage.

During the celebration, the Principal Registrar shall have the Certificate of Marriage printed and presented to the various Registrars as well as the authorized Minister of the licensed place of Worship.

That’s it. Court Marriage is simple and straightforward. All you just need to do is to follow the steps explained in this article, and you’re good to go.