A dam is a physical blockage that prevents water from flowing, creating a reservoir in the process. Dams in Nigeria are typically constructed to use water to generate electricity. Hydroelectricity is the name for this kind of energy. Alternatively, reservoirs built dams are used to control flooding effects. In addition, they supply water for navigation, aquaculture, industrial use, irrigation, public consumption, and other uses. 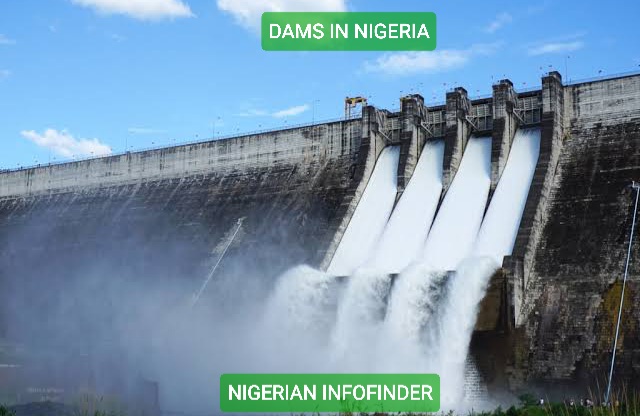 There are over 323 major, medium, and minor dams in Nigeria that have been built and are now in use. I assume you were looking for a comprehensive list of these physical structures and their locations around the country when you landed onto this page. A complete list of Nigeria’s major dams and reservoirs is provided in this article.

The comprehensive list of dams and reservoirs in the nation is provided below.

Kainji Dam is possibly the most significant dam in Nigeria. The dam is located in the Nigerian state of Niger, directly across the Niger River. This actual building cost $209 million to construct between 1964 and 1968.

The Kainji lake, a water reservoir, was created by the Kainji dam. The primary purpose of the Kainji Dam was to produce hydroelectricity, which it does to some extent in practically all of Nigeria’s major cities.

Jebba dam is yet another major dam in Nigeria. It is located in Jebba Town, a town that divides Kwara State from Niger State. The hydropower Jebba dam makes a sizable contribution to Nigeria’s power network. The enormous strength of the River Niger is utilized by Jebba Dam to produce a large amount of electricity.

The Shiroro dam is situated on the Kaduna River in Niger state. It started operating in 1990 and makes a sizable contribution to Nigeria’s power supply.

Shiroro dam is a 600MW hydropower project and one of the largest dams in the country. It can be found in Niger, Nigeria, on the Kaduna river or basin. The project is still under progress. Its development has gone through several stages.

Asejire Reservoir is one of Nigeria’s operational dams and reservoirs which is situated in the state of Oyo. The structure was constructed when Nigeria gained independence in the late 1960s. According to reports, the reservoir supplies raw water to Ibadan’s Asejire and Osegere water treatment facilities. Additionally, since farming is prohibited in the region, the reservoir is always kept full.

The Bakolori Dam is situated in Sokoto State, in the northwest of Nigeria. The project was finished in 1978, and the reservoir was filled the following year. It is referred to be a significant reservoir that supplies the well-known Niger River.

This dam does have a capacity of 450 million cubic meters of water per day. The population of the area suffered a great deal as a result of the dam’s construction. Many farmers were evicted, and many locals became homeless as a result.

The Water Resources and Engineering Construction Agency of the Kano State Government initiated the Challawa Gorge reservoir project, which was entirely financed by the federal government. The dam is 42 meters high and 7.8 kilometers long, with a surface area of 3857 km2. This guarantees that the dam can store 904,000,000 m3 at full capacity.

The project was intended to generate hydroelectric power and was expected to have a 3MW capacity, particularly during the rainy months.

The Yamaltu local government area of Gombe State is home to the Dadin Kowa Dam. The town’s residents depend primarily on it for their drinking water. The dam was built primarily to produce energy and irrigation. According to reports, the reservoir can hold 800 million cubic meters of water in total.

The Goronyo Dam wasn’t officially opened until 1992 despite being finished in 1984. It is said that the dam reduces floods and allows for more water release in particular during the dry season. This clause relates to the upcoming Zauro polder project in Kebbi State, which is located downstream.

The Gusau Dam creates a reservoir in the Sokoto River. The surrounding communities receive water from it. Sadly, it experienced its first collapse in 2006, devastating 500 homes and leaving more than 40 people dead.

The Ikere Gorge Dam can hold 690 million m3 in its reservoir. This dam’s development began in 1983, while Shehu Shagari’s presidency. The dam was predicted to produce more than 37.5 MW of energy. It also irrigates 12,000 hectares of land in Lagos and provides water to nearby villages.

The Kafin Zaki Dam is a planned reservoir structure on the Jama’are River in Bauchi State. Though the project is not physical yet but shrouded in controversies, if built, the dam would be 11 kilometers long. Additionally, a method for installing a hydroelectric plant would be built into the architecture. The reservoir would make it possible to irrigate more than 120,000 hectares of fertile land, which would benefit the agricultural industry.

The Kiri Dam is situated in Adamawa State’s Shelleng local government district. The embankment has a clay blanket inside and is 1.2 km long and 20 m high. 1982 saw the completion of the dam. The reservoir is estimated to have a 615 million m3 surface area.

The Mambilla of the largest dam projects in Nigeria and Africa is the Mambilla Power Station. This will be linked to three dams that span the Donga River in Taraba State and will function as a hydroelectric power plant.

Cross River State is the location of the Obudu Dam. It has a capacity of 4.2 million m3, is 15 m tall, and has a 425 m total crest length. The project was completed in 1999. It serves as irrigation for farms as well as for tourism, fishing, and other leisure activities.

The Oyan River Dam provides raw water for residents of Lagos and Abeokuta. The structure might be used for power production and irrigation. The dam has a drainage area of 9,000 km2 and a surface area of 4,000 hectares. The dam has a net storage space of 270 million m3, is 1044 m long, and is 30.4 m high. There are three 3-megawatt turbines erected there.

Governor Audu Bako oversaw the construction of the Tiga Dam in the years 1971 to 1974. It was predicted that irrigation projects will increase agricultural production. The dam has a 178 square kilometer (69 square mile) surface area and a nearly 2,000,000 cubic meters maximum size (71,000,000 cu ft).

The Rima River lowland in Kebbi State was intended to be irrigated by the Zauro polder project. Even if the project appears contentious, the advantages of this dam project would really be excellent with competent management.

Katsina State is the location of Zobe Dam in Nigeria. Besides that, it is a 2,750 m-long construction that is filled with soil and measures 19 m in height. According to reports, the dam has a 179 Mca storage capacity and an irrigation capability of 8,000 hectares.

Katsina State is where the Jibiya Dam is situated. This dam’s development started in 1987 and was finished in 1989. This dam was constructed with irrigation and water supply in mind.

Daniel is a Editor on Nigerian Infofinder who craves for writing and researching. He also writes for Nigerian Infopedia
← Previous Post