According to the World Health Organization, snakes infect around 5.4 million people each year, resulting in an estimated 100,000 deaths. Venomous snakes kill their prey by injecting deadly compounds produced in a modified salivary gland into the prey with their fangs. Nigeria is home to around 250 different snake species. We’ll look at the top 10 most dangerous snakes in the country in this article. A close encounter with one of these reptiles could result in death. 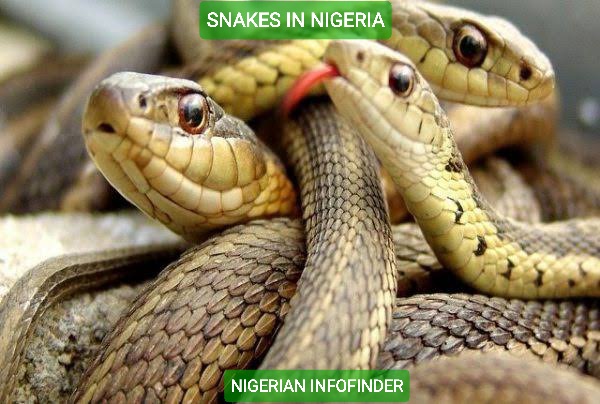 TOP 10 MOST DEADLY SNAKES IN NIGERIA

Snakes do not appeal to everyone. Some Nigerians like to kill and eat snakes, while others keep them as pets. Regardless of how you feel about snakes, the following are the most dangerous snakes found in Nigeria.

The West African carpet viper is a tiny snake that grows to be around 20 inches long. Carpet vipers are yellowish-brown in hue, with dark dots running down the sides of their bodies. These locations are meant to throw possible predators off.

The carpet viper is prevalent in Nigeria’s northern regions, where it preys on farmers who come to harvest their crops.

The African Rock Python, sometimes known as the Python sebae, is a big non-venomous snake native to Nigeria. The African Rock python, like all pythons, kills its prey by constricting and devouring it whole.

Despite the fact that it only kills people on a very rare occasion, this snake is often feared due to its massive size and power. A fully grown man would be no problem for the snake to consume, depending on its size.

Python has been found in Lagos, Abuja, Ondo, Benin, Port Harcourt, Anambra, Akwa Ibom, and Benue states, among others. This is one of Nigeria’s most widely known snakes.

Regardless, the African Rock Python is revered in some parts of the country, while others regard it as wild game and a rich source of protein in others.

The Bites Arietans, sometimes known as the Puff Adder, is one of Africa’s most dangerous snakes. Puff adders are the snakes that kill the most people in Africa.

This is a widespread snake species in Nigeria, however it prefers to live in densely populated rural areas. Puff adders have an unique face and nose and can reach a length of 1-2 meters.

So rather than escaping from predators and danger, puff adders employ their extraordinary camouflage ability to protect themselves by remaining stationary. As a result, people are bitten when they step on them by accident.

One of Nigeria’s most poisonous snakes is the Gaboon viper (Bitis Gabonica). This snake is prevalent in Nigeria’s eastern region, although it can also be found throughout East and West Africa. The snake’s ability to blend in renders it invincible, and it attacks farmers who get too close.

The Gaboon Viper is still, its brown skin blending in with the dry grass on the forest floor. The Gaboon Viper’s main distinguishing characteristics include horns that are slightly above its nose, a leaf-shaped head, a fat short body that is between 4 and 6 feet long, triangular scale patterns, and, of course, long fangs.

The Egyptian cobra (Naja haje) is among the world’s most massive venomous snakes. It can be found above the Sahara in North Africa, as well as in areas of West and East Africa. There have also been several sightings in Lagos, Ondo, Benin, and other parts of Nigeria’s eastern region.

This snake is available in a range of colors, ranging from brown to black and occasionally copper-red. The Egyptian cobra is notorious for its lethal neurotoxic venom and enormous hollow fangs, which cause death from respiratory collapse when bitten.

Dispholidus Typus popularly known as the Boomslang, is a green snake that frequently lives in green grass. It is also considered one of Nigeria’s most dangerous snakes.

Sub-Saharan Africa is the home of the Boomslang. This snake is between 5 and 6 feet long and has very huge eyes. Its venom is haemotoxic, which means it disrupts the body’s natural blood-clotting process, resulting in unrestrained external and internal hemorrhage if not addressed appropriately.

The Black-Necked Spitting Cobra (Naja nigricollis) is an extremely venomous snake that has been responsible for numerous human deaths due to snakebite.

When threatened, this olive-brown snake flashes its dark-colored hood, and when provoked, it spits. It can reach a maximum size of 7 feet and hunts at night. This snake is always disguised amid the logs.

The Mali cobra (Naja Katiensis), often known as the Katian spitting cobra, is a West African spitting cobra species. The Black-Necked Spitting Cobra is a near relative of this snake (Naja Nigricollis). This endangered species was brought into Nigeria by foreign herbalists and is one of the country’s most poisonous snakes.

Tropical and subtropical grasslands, savannas, and scrublands are home to the Mali cobra.

Horned adders are suspected of being smuggled into the county and have been labeled as an invasive species. They are usually found in vegetated deserts and farms in the country’s northern regions.

The Jameson’s mamba is also one of Africa’s most venomous snakes. Over 1,200 people have died as a result of this snake in the African plains. It is well-known in Benue State for attacking youngsters and farmers who get too close.

Unlike some of the other venomous snakes, Jameson’s mamba could grow up to 7 feet long and is extremely swift while striking and chasing prey.

In West Africa, Jameson’s mambas are a common and widely distributed snake. It is well-known in Nigeria’s eastern regions, where it is known as the sleeping tree snake. Buildings, parks, farmlands, and plantations are all common places to find it.

That’s it for the most deadly snakes in Nigeria. Did any of them catch your attention? Have you ever encountered one of these reptiles in the outdoors? Please share your thoughts and experiences in the comments section below!