To understand which states are the most dirtiest in Nigeria, we must first understand that there is no Nigerian state that isn’t dirty. The only difference is that some states have more clean areas than the others, which is due to the combined efforts of the government and the masses of such states in combating waste management. One thing you should know about Nigeria is that the effect of waste or uncleanliness in the country is as a result of the ever growing population in the land. 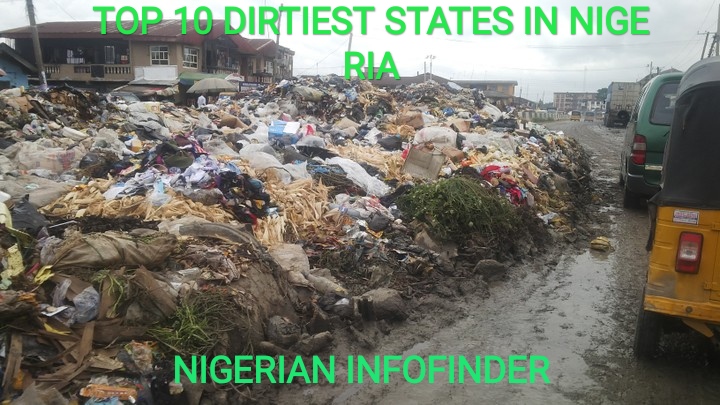 While we have previously covered the cleanest states in Nigeria, we showed why these areas are blessed with clean environment. Unfortunately, many states in Nigeria are dirty and have lived below expectations set by the UN on maintaining a healthy environment. No wonder, diseases and other health hazards find their way to thrive in this country. Moving round both the urban and rural areas in these states, you would be surprised as to how wastes and refuse dumps are littered around the streets.

According to data gotten from Clean-Up Nigeria and the United Nations Environmental Program (UNEP), here are the 10 most dirtiest states in Nigeria this 2021.

Abia state ranks as the most dirtiest state in Nigeria today with over 75% of its areas seen as unclean. You’ll hardly visit a local government in Abia state that you won’t see refuse and wastes dumped in such areas. This status is as a result of neglect by the various state government elected in the state to keep the environment clean. Aba which is seen as one of the major cities in this state to start a business, is now regarded as the most unclean area in Abia state. Aside the issue of dirtiness, poor waste management, indigenes of Abia state battle also with floods and erosion. It is very difficult to live in such place due to its uncomfortable and unclean environment.

Lagos state ranks as the second dirtiest Nigerian state with over 65% of its areas seen as unclean. Even though Lagos is the commercial hub of the country and is among the most developed states in the federation, there are parts of Lagos that falls down the pecking order when it comes to neatness and waste management. Some dirty areas in Lagos where you see loads of refuse dumps include: Ajegunle, Oshodi, Mile 12, Orile, etc. Lagos wasn’t listed among Nigeria’s dirtiest states in the past due to the then efforts of the former state governor, Babatunde Raji Fashola, who really ensured that environmental agencies were set up to punish citizens who littered the streets and bus-stops of the state.

Kogi state surpassed Anambra as the third most dirtiest state in Nigeria this year. With over 65% of its land area seen as extremely unclean, Kogi state has been listed as a state that is unsafe to live in. While the remaining 35% of the state seem a little clean, neglect of the greater percentage of the state remains an unending reoccurrence with the change in the state’s administration. Also note that Kogi state is among the least developed states with most of its inhabitants poorly educated on the dangers of living in an untidy environment.

If you are looking for the dirtiest state in the south-eastern part of Nigeria, Anambra State ranks second after Abia but fourth in Nigeria. Its major city, Onitsha, is well known for its dirtiness with various streets littered with refuse dumps that makes the area untidy. Other areas in Anambra State that is untidy include: Nkpor, Obosi, Upper-Iweka and some parts of Nnewi. The inhabitants of this state believe that the negligence of the various administrations of the state government isn’t doing it’s best to ensure that waste management is being taken serious and environmental offenders are dully punished.

While it is surprising to see one of Nigeria’s most populated state in this list, Kano State has its issues when it comes to cleanliness and waste management control. Although, Kano is among the best northern states to start a business in Nigeria, it doesn’t exempt the fact that over 65% of the areas feeling the effects of not having a clean environment. Moving around Kano’s business areas and bus-stops, one would notice how areas and streets are littered with feaces, dirt and other smelling objects. The absence of proper waste management and corruption has eating deep into the fabric of the state government.

Osun State isn’t left out and ranks sixth of the list of Nigeria’s most dirtiest states. Most of the blame goes to its residents and inhabitants living in Osun State. The state government in collaboration with the local government in the past provided waste bins in almost all areas of the state, but the inhabitants still dispose of their trash on streets and bushes around. The waste problem of this state has gotten to a level that diseases such as malaria, typhoid and it likes are on the rise in Osun State.

Nassarawa State has also being listed as one of the most dirtiest northern states in Nigeria. This is due to the low development caused by incessant security unrest and destruction of homes, properties, and lives being wasted by deadly terrorist groups. Nassarawa ranks as the seventh unclean state in the country even if it is in close proximity to the capital of the federation, Abuja, one of Nigeria’s cleanest cities.

Zamfara state has its own environmental problems amid it’s security challenges. This state is one of the least developed and least educated in the country, leaving Zamfara as one of the poorest states in the country. The low IGR of the state and other security challenges makes it practically impossible for the state government to even create a plan to curb the untidiness in the state. When you travel among the 15% areas which seem a bit clean, you would marvel at the rate at which the degree of waste problems in prevalent in the state.

Yobe State is another poor state with similar problems as other northern states. It ranks as the 9th dirtiest Nigerian state with low development due to security challenge in the state.

Ogun state has over 50% area in its various local government areas that are extremely dirty. This state is located in the south-western region of Nigeria and has the least percentage when it comes to neatness among these states. Although the Ogun State government has tried to improve its image by making its urban cities near, neglect of the lesser rural communities is still a problem as dumps and diets still litter these places.

The above Nigerian states that have been ranked dirty this year have much work to do if they must be removed from this list.  The only way to avoid such is through meaningful reorientation of its inhabitants on the dangers of living in a dirty environment, proper waste management plan and also setting up agencies that would arrest environmental offenders. This in turn would ensure that citizens take cleanliness and environmental sanitation seriously so as to promote a disease free and clean Nigeria.