There are over 4 neighboring countries that share borders with Nigeria when you check the map of Africa. These countries are regarded as Nigeria’s neighbors. In this article, we detail information about these nations and their various land boundaries. 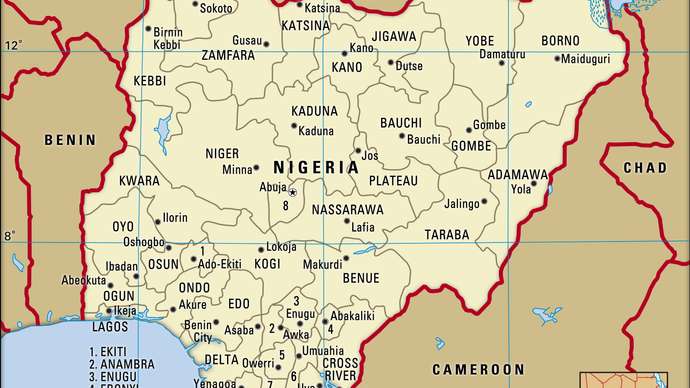 Nigeria shares land boundaries with four countries – to the east with Cameroun, Chad in North-East, Niger in the North, and it likewise borders the Republic of Benin in the Southwestern part. Moreover, the southern borders of the country have the coastline with the Atlantic ocean. These countries bordering Nigeria have some common relation with the place they share boundaries within the country. How about we look at how many countries share land borders with Nigeria

Below are the countries that share land boundaries with Nigeria.

The Republic of Benin borders Nigeria in the east. The country shares a common boundary with Togo toward the west, Nigeria toward the east, and Burkina Faso and Niger toward the north.

The capital of Benin is Porto-Novo anyway the economic capital and the seat of government is situated in Cotonou which is likewise the largest city in the country.

There are more than 10.87 million people in Benin republic. A significant part of the country’s populace lives on the little southern coastline of the Bight of Benin which is a piece of the Gulf of Guinea in the northern tropical piece of the Atlantic Ocean.  Agriculture is the major engagement of the people of Benin republic.

Moreover, Benin republic is a francophone country and the official language of the country is French yet the local dialects are Fon and Yoruba. The prevailing religion in the country is Christianity. There are also some numbers of Muslims in the country.

Cameroon is a francophone country and French is the official language with other local indigenous dialects. English is also an official language though not spoken by the generality of the population. The country is located in the central part of the continent and it depicts Africa’s lifestyle. Some of the features in Cameroon include sea shores, deserts, mountains, rainforests, and savannas. The most elevated point of the country is Mount Cameroon in the Southwest Region. This mountain is at about 4,100 meters (13,500 ft). In terms of population, the urban area that tops in the country is Douala. This city is also the economic capital while Yaoundé is the country’s political capital.

Looking at the people of Cameroon, for the most part they are Christians and African customary religion worshippers. There are some numbers of Muslim in the country.

The country is named after the well known Lake Chad which borders in between the country and Nigeria. The capital of Chad is N’Djamena and it is the largest city in the country.

The greater part of Chadians are Muslims and they share a relationship with some tribes in northern Nigeria. Additionally, these individuals share comparative ethnic groups and social legacy. They are firmly related by occupation, especially the nomadic cattle rearing.

Looking more at the people of Chad, it can be seen that they have a diverse ethnicity just like Nigeria. The country is home to more than 200 diverse ethnic groups. The official languages in Chad are Arabic and French.  There are about 55% of Muslims making the Chad population while 40% are Christians.

Moreover, Chad was colonized by France in 1920 and they acquired independence in 1960 under the government of François Tombalbaye.

Sadly, a significant part of Chad’s population lives in poverty and a lot of them are displaced due to this reason and insecurity issues.

Nigeria borders Niger in the north. The country is formally known as the Republic of Niger, and it got its name from River Niger which runs through the country. Niger Republic is bordered by Libya toward the upper east, Chad toward the east, Nigeria and Benin toward the south, Burkina Faso and Mali toward the west, and Algeria toward the northwest.

The capital city of Niger is Niamey, which is the most developed city in the country.

Niger is very close to Nigeria, especially the northern parts. This closeness has allowed these people to have a comparative lifestyle for a very long time. They are of similar ethnic groups and have similar customs and traditions.

Most Nigerians are Muslims and they are ranchers whose aptitude is mostly in cattle rearing. The people of Niger have cross boundary marriages, family ties and method of dressing and geologically they have a similar regional territory.

With a land area of 1,270,000 km2 (490,000 sq mi), Niger is the largest country in West Africa. Be that as it may, more than 80% of its land region lies in the Sahara Desert. The country’s population is around 21 million and is found in high concentration in the far south and west of the country.

Niger is a very poor country and it has been positioned near the lower part of the United Nations’ Human Development Index (HDI). Starting in 2015, the country was positioned 187th of 188 countries.

An overwhelming part of the population lives in provincial areas, and has little admittance to high level education. This has made the country to be lagging behind in terms of education in the world scene.

We have been able to give a detailed list of the countries sharing land boundaries with Nigeria. This includes Benin republic, Cameroon, Chad and Niger republic.