Crime will eventually exist in every country or community. As a result, regulations must be in position to protect people from engaging in such behavior and to punish anyone who does. Certain crimes have been noted to be more widespread in Nigeria than others. This article will detail the top and thus most common crimes in Nigeria, as well as their penalties. We will include all punishable offenses and their punishments in this post, according to the criminal act or, better yet, the Nigerian constitution. 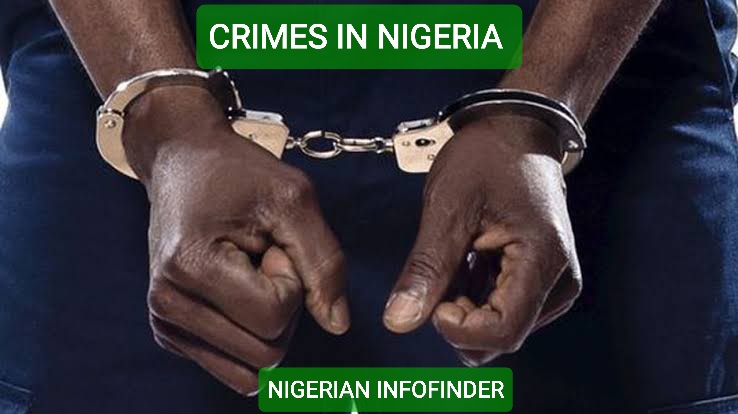 The following are examples of crimes and offenses that are punished in Nigeria:

Terrorism is a broad phrase that refers to the act of inciting fear and harm in the people in order to intimidate them, usually through the use of religion, politics, or money as a boosting concept. Terrorism in Nigeria is penalised by life in prison or, if death is involved, the capital penalty.

Through use of a computer or lots of different computerized device to commit a crime. The EFCC requires cybercafés to register so that the agency can monitor their operations and enforce operational regulations to prevent cybercrimes. Cybercrime involves a ten million naira fine or a five-year jail sentence.

Rape is defined as engaging in sexual intercourse with someone against her consent, especially with violence.

Around 90% of predatory sex against women is perpetrated by males. Rape has come to symbolize, to some extent, Nigerians’ ambivalence, moral decay, ethical insolvency, materialism, perverted conscience, pervasive immorality, and deception over time. Rape carries a life sentence or a lower penalty, as well as a monetary punishment.

This type of crime can take many different forms. The key resemblance between this type of crime and other forms of crime is that it hurts a country’s economy – in this case, Nigeria’s – and can even cause the country to go into recession. There are a lot of crimes like this. Tax evasion, pipeline vandalism, and a plethora of other problems are all on the rise. The sentence is seven years in prison, with or without a fine.

A financial crime is an offense that involves the unauthorized use of money or financial goods such as checks, drafts, and money orders, among other things. For example, bank fraud and the distribution of fraudulent checks. 14 years in prison or a fine, or both, is the penalty.

This is a form of con in which a con artist convinces a victim to pay money up front for a potential business partnership, romance, marriage, contract, or other transaction. A financial crime can result in a fourteen-year prison sentence, a fine, or both.

The illicit transfer of funds out of Nigeria is known as money laundering. Money that hasn’t been reported to the authorities and is usually obtained illegally in order to be converted to legal cash. Money laundering is punishable by a jail term of seven to fourteen years and a monetary punishment.

People are questioning the need for survival skills in this no-man’s-land because of the Nigerian police force’s horrific violence and antagonism. The public has no defined defense against police abuse. In order to defend themselves, cops shoot defenseless people and tag armed robbers. Nigerians who were defenseless were sentenced to prison for crimes they did not commit. The penalty for police brutality is three years in prison. We’ve also included information on how to file a complaint against a police officer.

Bribery is the act of offering something, usually money, in return for a secret advantage, whereas corruption is the act of abusing a position of trust in order to achieve an unfair advantage. Bribery and corruption carry a three-year prison sentence.

This is a rather common infraction in Nigeria. It has long been a hazardous vice, and it is getting increasingly more so in some locations. Robbery carries a seven-year sentence, with or without a fine. In the case of violent crimes, the additional charges would be charged separately.

Any offenses committed during or after a religious crisis would be held accountable. If a religious disaster or violence occurs, for example, the perpetrators would be held responsible for murder, arson, rape, and theft, as well as being prosecuted and suitably punished.

Complicity carries the same penalty as the crime for which it is directly liable.

Criminal conspiracy carries a maximum sentence of six months in prison, with or without a fine.

Slander and libel can result in three years in prison, a fine, or both.

Embezzlement of funds carries the following penalties: The max sentence is seven to fourteen years in prison, plus a monetary fine.

The penalty for seizing a ballot box is a maximum fine of $50,000,000 or a sentence of not less than ten years in prison, or both.

Forgery carries a seven-year sentence, with or without a fine.

Physical assault carries a life sentence or a lower penalty, as well as the possibility of a fine.

Lastly, you ought to be conscious that there are a variety of additional crimes that are common in Nigeria and are all punishable under the law. To prevent being punished, you should take the time to learn about these rules and what it implies to break them. Even though, as they say, ignorance of the law isn’t a defense in court, this information will lead to a greater understanding of these offenses.

It is vital that you engage a lawyer to represent you if you believe you have been wrongly charged. Some people break the law accidentally, and if your lawyer is good, he or she may be able to utilize this as a justification in your instance.