According to a recent study conducted, Nigeria generates substantial quantities of palm oil and accounts for seven percent of the overall of global output. With such a large number, several nations play a big role in this achievement. Despite the fact that palm oil production occurs in more than half of Nigerian states, these 10 are considered the primary producers of palm oil in the country. 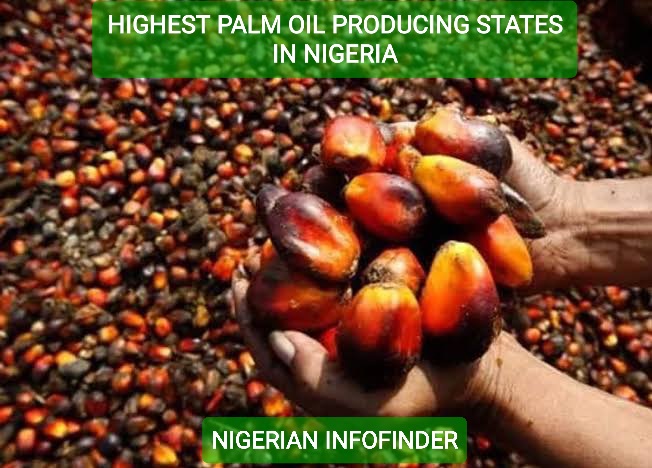 Nigeria is now the world’s fifth largest producer of palm oil, trailing only Indonesia, Malaysia, Thailand, and Colombia in South America. Despite the fact that crude oil has become the country’s economic backbone, Nigeria continues to be a global leader in palm oil production. In this article, we’ve highlighted the states that produce the most palm oil.

The following is a list of Nigeria’s top ten highest palm oil production states as of now.

This is the country’s second-largest producer of palm oil. The state of Cross River is surrounded by tropical flora, which is ideal for palm oil production. The state government has worked hard to establish the state as a leader in the oil palm business. In 2018, Mr. Eta Ndoma-Egba, President of the Calabar Chamber of Commerce, Industry, Mines and Agriculture, stated that Cross River State generated over 200,000 mt tons of palm oil and also had over 360,000 hectares under oil palm production.

Rivers State is yet another coastal state on Nigeria’s list of the top palm oil producing states. Palm oil is among the most widely used goods in the world, with practically everyone using it.Ikwerre and Etche Local Government Locations in Rivers State are major palm oil production areas. However, the crop is grown in industrial amounts in all of the state’s local government units.

Edo is a Niger-delta state and one of Nigeria’s top palm oil manufacturers. The state leads the country in terms of oil output due to its location in the rain forest flora, which favors palm oil production. The state administration has recently announced plans to start the Edo Oil Palm Initiatives. To get the project off the ground, the state contributed more than 51 hectares of land. As a result, palm oil production in the state has increased.

Ondo is a state noted for producing high-quality agricultural products. The state currently tops the list of the nation’s largest cocoa manufacturers. Ondo is Nigeria’s leading cocoa-producing state, and agricultural produce production accounts for a large portion of the state’s GDP. Rice, yams, corn (maize), coffee, taro, cassava (manioc), vegetables, and fruits are among the state’s other income crops.

Imo is a south-eastern state with Owerri as its state’s capital. The state is also among the country’s top producers of palm oil. Much of this can be attributed to the efforts of the state government. Farmers in Umuehihe Village in the state’s Okwu Ikeduru Local Government Area were recently given access to a palm oil processing equipment to kick start the palm oil business. This, along with a slew of other projects, has been critical to Imo’s palm oil output.

Delta is one of Nigeria’s most important palm oil producing states. The stimulating vegetation as well as the initiatives of both the government and the farmers engaged have a big impact on this.

Oil palm plantations cover 1.2 million hectares in the state. The Central Bank of Nigeria Oil Palm Development Initiative backed this project, which aimed to enhance wealth and foster economic progress in the state.

By providing an alternative for moneyed natural resources, the palm oil sector has continued to play an important role in the Nigerian economy. The state of Bayelsa is well noted for its palm oil output. The state has an oil palm mill, WJICY, which is the state’s only semi-mechanized mill. Aside from that, further efforts are being made to position the state as the leading producer of palm oil.

Anambra is also among the top states in Nigeria that generate commercial quantities of palm oil. Thousands of hectares of land in the state are dedicated to the production of commercial palm trees.

The state of Anambra is surrounded by tropical rain forest vegetation, which is ideal for palm oil production. Because of the commitment of the farmers participating and government programs, the state has become one of the country’s largest producers of palm oil.

In Nigeria, palm oil is one of the most valuable cash crops. Palm oil production is a source of income for very many remote communities as well as a source of revenue for the government. The oil palm sector is very profitable and has a wide range of applications. That’s the length of this article, as we’ve been extra precise in listing Nigeria’s top 10 highest palm oil producing states.