One of the booming sectors in Nigeria nowadays is entertainment. It is not surprising that Igbo entertainers are among those spearheading the charge given the ongoing trend. The Igbos have specialized in the nation’s music sector. Their musical artists are succeeding just as well—if not better—in the Nigerian music market. We’ll be examining at a list of Igbo-tribe-affiliated musicians from Nigeria in this post. We’ll also examine how they fare in both life and business. 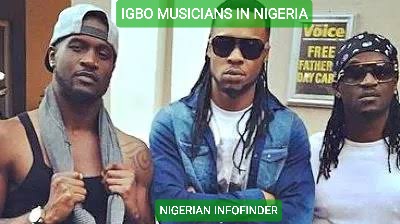 In no particular order, here are top 10 most popular Igbo musicians in the country today.

One of the most well-known musicians from the Igbo region of Nigeria is undoubtedly Flavour. Over the last 7-8 years, he has established a significant name for himself. Flavour has effectively established himself as one of the best performers in the nation during this time.

On November 23, 1983, Flavour was born in the state of Enugu. He was raised in Enugu, where he was born, although his roots are in the Anambra state town of Umunze. In 2005, the singer entered the Nigerian music scene with the release of his debut studio album, N’abania. Flavour has released a total of five albums as of this writing.

Flavour has so far had a successful career in the music business. Other than Flavour’s music

A well-known Igbo musician named Peter Okoye was born on November 18, 1981. Top Nigerian singer Mr P is a musician who goes by the stage name Mr P. In Jos, Plauteau State, Mr. P and his twin brother Rudeboy were raised in a big household. He was a member of Josephine Okoye and Mazi Moses Okoye’s family.

A music and acting club at their school was joined by Peter and his brother Paul. They began singing, dancing, and performing well-known tunes at this point.

As a member of the P-Square duo with his identical twin brother Rudeboy, Peter gained notoriety in the 2000s. He received an honorary doctorate from the ESCAE University in Benin in 2021.

A well-known Igbo singer from Nigeria is Yemi Eberechi Alade. She is a songwriter who has traveled to many different nations performing what she does best. She is on the list of well-known pop singers and is best known for the critically acclaimed song “Johnny” from 2013.

Yemi Alade, better known by her stage name Yemi Alade, was born in Abia State on March 13, 1989. While her mother Helen Uzoma is of the Igbo ethnicity in Nigeria, her father James Alade was a native of the Ondo state. She is the fifth child out of seven.

Yemi is also a University of Lagos geography graduate. Yemi is also the first female performer to have more than one million subscribers on YouTube.

The 18th of November 1981 saw the birth of Paul Okoye. Singer Rudeboy, a Nigerian artist, is more known in his home country. He became well-known in the 2000s when he and his identical twin brother Peter Okoye formed the group P-Square.

Paul and his brother, Peter, often known as Mr. P, attended St. Murumba Secondary School in Jos. Paul joined a school music and theater group, where he began dancing and singing along to cover songs written by Michael Jackson, Bobby Brown, and MC Hammer. Together with his brother Peter, he accomplished this.

Both band members pursued solo musical careers after P-Square split up in 2017. They are now back together and have released a couple of songs together.

Only a few years ago, Phyno suddenly rose to the top of the Nigerian music scene. He has developed into one of the most well-known artists in the business over this time. The musician gained notoriety in 2012 thanks to his successful Ghost Mode collaboration with Olamide. His Igbo-themed rap style has earned him fame.

The rapper was raised in the city of Enugu and goes by the moniker Azubuike Nelson Chibuzor. Later, in 2010, he moved to Lagos in order to advance his musical career.

The Igbo rapper has established a reputation for himself in the field. He is best recognized for his distinctive rap style, which is loved by all. He is among the

One of the top Igbo musicians in the Nigerian music scene is Illbliss, often known as Oga Boss. He manages records and is a master rapper from Nigeria. His area of expertise is the talent management company that launched the careers of Phyno and many other well-known figures in the sector. After his album was released in 2009, Oga Boss became well-known.

Illbliss, real name Ejiofor Melvin Tochukwu, is from the Imo State village of Nkwerre. He is possibly one of the most wealthy musicians in Nigeria right now. Although his musical career has been moderately successful thus far, he has had greater success in the business world.

One of the best contemporary artists working today is Tekno. To the surprise of many, the Nigerian musician is an Igbo man. He is from Ebonyi State and goes by the name Augustine Kelechi Miles.

Tekno got a contract with SONY Music, one of the largest music management companies in America, around a year ago. Although the specifics of the transaction were kept private, it is estimated to be worth $1,000,000 or so. In addition to this, the Igbo music artist has a wide range of successful endorsement contracts.

Possibly the Igbo queen of the Nigerian music scene is Chidinma Ekile. She had a contract with Capital Hill Records up until recently.

Chidinma, also known as Ms. Kedike, gained notoriety for her actions during the third season of MTN Project Fame. Her most famous hit song, Kedike, earned her the moniker Ms. Kedike.

Chidinma’s family lives in Lagos, where she was born and reared. She, however, is an Imo State native. The musician has accomplished a lot for herself in the business.

Without a doubt, one of the most well-known musicians in Nigeria right now is Patoranking. Timaya helped him become famous after he launched his popular song, Alubarika (with Timaya).

Patoranking is an Igbo man, which many people are unaware of. Okorie Patrick Nnaemeka is the real name of the reggae artist. He is an Onicha, Ebonyi State native. He was, however, born and raised in Lagos.

Patoraking is currently arguably the largest reggae artist in the nation. Financially, he has done incredibly well for himself.

Kingsley Kcee, also known as Chinweike Okonkwo, is a Nigerian singer and composer. He formerly belonged to the Hip Hop combo Kc Presh. He is from the Nigerian Anambra State local government area of Amaputu in Uli in Ihiala.

Five Star Music now represents Kcee in his record agreement. He is E-older money’s brother. For 12 years, Kcee and his dependable buddy and companion hajie performed together. They first connected in a church choir, where they remained until they both left for a performance.