Africa is the world’s second-largest continent, trailing only Asia in terms of land area. According to Wikipedia, Africa is made up of 54 countries, each with its own size and population. You might be surprised to learn that Algeria has the largest landmass in Africa. 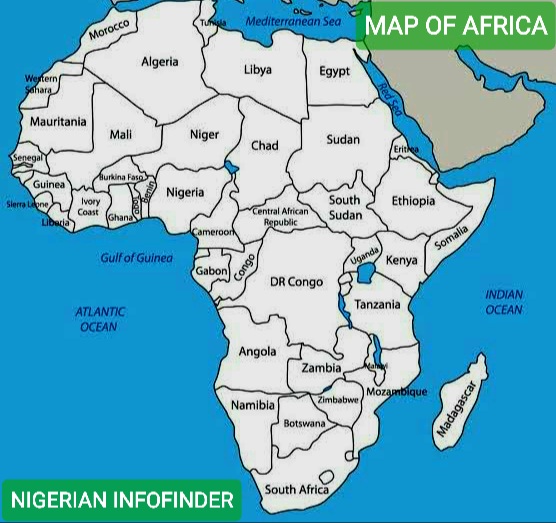 This indicates that it is larger in terms of landmass than Nigeria, despite the fact that Algeria is more well-known in other countries than Nigeria.

Each African country has its own landmass, population, and territory. The following is a list of Africa’s largest countries by landmass.

THE 10 LARGEST COUNTRIES IN AFRICA BY LAND MASS

We’ll compare the top ten African countries and show you how they stack up against one another.

Algeria is Africa’s largest country. It is the tenth-largest country in the world. While many maps make Africa appear smaller (the popular Mercator projection map makes land near the poles appear larger), it is a vast continent. Africa has 54 countries and could fit the entire United States, China, Europe, India, and Japan within its borders!

Algeria is Africa’s largest country, and it is located in the northwestern part of the continent, bordering the Mediterranean Sea as well as many other countries. The country has a large amount of oil and natural gas reserves. However, the country has recently experienced political unrest, mass protests, and other issues that threaten the country’s stability. The country has a rich culture but also struggles with human rights issues. The Algerian Desert, a branch of the Sahara Desert, covers more than 90 percent of the country’s land.

The Democratic Republic of the Congo (DRC) was previously known as Zaire. The vast country is situated in the heart of Africa and is home to a variety of ecological zones. The country is well-known for its high production of raw minerals and processing materials. However, this country has struggled with both political and humanitarian issues.

The Democratic Republic of the Congo is Africa’s second most populous country. It is densely forested and has little infrastructure.

Sudan was Africa’s largest country until it split with South Sudan in 2011. The country still has a sizable population. The country is located in northeastern Africa, bordering Egypt to the north and the Red Sea to the east. The country earns the majority of its money from oil production, and it has recently transitioned from a religious to a secular state.

Libya is a country in central northern Africa with a border on the Mediterranean Sea. The country makes a lot of money from its massive oil reserves. The Libyan Desert, a section of the Sahara, covers much of the country. In some places, this area can go for decades without rain. That is why most people live along the coast. Beginning in 2010, the country was the site of the Arab Spring uprisings.

The Republic of Chad is located in northern Africa, with much of the country being desert and some being savannah. The country is home to a diverse range of cultures, ethnicities, and languages. It is also one of the poorest countries in the world, with many issues concerning human rights and governments. In recent years, the country has turned to oil production to boost its GDP.

Niger is named after the Niger River, which runs through the country. Niger has been inhabited by humans for over 280,000 years. As a result, this country is rich in archaeological sites that depict human history’s past.

Angola is located in the southwestern part of Africa, bordering the Atlantic Ocean. The country is known as the Kuwait of Africa because it is a major oil producer and an OPEC member. This is a country that is modernizing at different rates in different parts of the country. Despite this, the country has a rich history as well as a modern culture.

The name Mali, which means “the place where the king lives,” was given to the Mali Empire, which ruled from the 13th to the 17th centuries. The country is located in western northern Africa, but it lacks a coastline along the Atlantic Ocean. The country was once ruled by French colonists. Despite periods of peace, Mali has been the site of numerous coups and violence in recent years, including in 2021. The country’s borders were closed as of 2022.

South Africa is situated at the very southern tip of Africa. The country is well-known for a variety of reasons, including the discovery of human fossils and the Cape of Good Hope. However, the country is best known for its apartheid policy in recent times, as well as Nelson Mandela’s leadership. The country has struggled to find internal peace, but it has consistently pushed for reform, better laws, and fairer treatment.

The country was formerly known as Abyssinia, and it now has a population of over 100 million people, making it one of Africa’s most populous and tenth largest. Ethiopia is a multiethnic country that has seen significant political changes over the last few centuries. The country’s economy is primarily based on agriculture, and it is well-known for its paleontological discoveries that provide historical context.

It is the only country with a 12-hour time system, whether counting from morning to night or night to morning, which is an incredible fact in and of itself.