According to various estimations, the population of Nigeria as of 2018 is over 250 million people. These are not official figures because population statistics are not updated every other year. The special panel takes its time conducting the census. 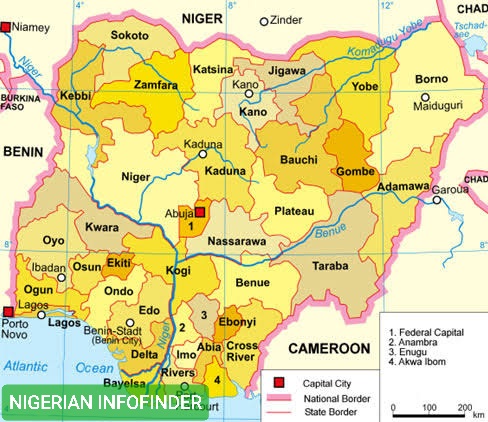 Nigeria is Africa’s most populous country. The population of the country is split over all 36 states and the FCT, with certain states being more populated than others. The geographical mass of Nigeria’s states is not distributed evenly, as is the population; some states are small with a huge population, while others are large with a small population.

LEAST POPULATED STATES IN NIGERIA AND THEIR POPULATION

Below is the full list of the smallest states in Nigeria and their population:

Bayelsa state is now Nigeria’s smallest state. Despite being in an oil-rich region of the Niger Delta. According to the 2006 population census, Bayelsa has a population of 1,703,358 people.

Nasarawa state has a population of approximately 1,863,275 people. It is located in the country’s North Central area, one of the zones known as the Middle Belt.

Ebonyi state is located in southeast Nigeria and has a population of 2,173,501 people. Abakaliki, the state’s capital, is also its largest city. Ebonyi state was one of six states established in 1996 by the then-federal military government, making it one of Nigeria’s youngest states. The state of Ebonyi was formed from parts of Enugu and Abia states, which were formerly members of the old Anambra and Imo states.

Taraba state ranks fourth on this list, with a population of 2,300,736 people. The state’s capital is Jalingo, and the majority of its residents are farmers.

Yobe state may increase its area and landmass in Nigeria, as it now ranks sixth among the country’s major states.

Gombe state is located in northern Nigeria, and its capital city is Gombe. It is the sixth most populous state, with a population of approximately 2,353,879 people.

Kwara state is located in northern Nigeria, with the religious city of Ilorin serving as its capital. Kwara is the only Yoruba-majority state in North Central.

The majority of Kwara State’s residents are Muslims, and the state is also rated seventh on the list of Nigeria’s least populated states, with a population of 2,371,089 people.

Ekiti state is without a doubt one of Nigeria’s poorest Yoruba-speaking states. It has one of the country’s smallest states and the least populated Yoruba land. It now has a population of 2,384,212 people.

Abia is a state in southeastern Nigeria that covers a land area of 6,32033 square kilometers. Its capital is Umuahia, and its most important commercial city is Aba. After separating from the erstwhile Imo State in 1991, Abia state has 17 Local Government Areas. The population of the state is now 2,833,999.

Cross River State is located in the south of the country and has a population of 2,888,966 people at the time of writing.

Imo state has a population of 3,934,899 people and is located in the southeast of Nigeria. It has a land area of 5,53035 square kilometers and is located between the lower Niger River and the upper and middle Imo Rivers. Its capital and largest city is Owerri.

Anambra is another state in southeastern Nigeria, with a population of 4,182,032 and a land area of 4,84436 square kilometers.

These are the smallest states in Nigeria terms of population. I hope the above-mentioned least populated states satisfies your curiosity.