In Nigeria, owning a private jet is not only for convenience, but also as a display of riches and wealth, and quite a few Nigerians are proud owners of this expensive piece of flying metal. 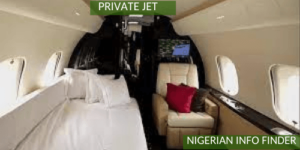 Of course, extremely wealthy Nigerians like seclusion, which they may obtain by travelling in their private aircraft. Some of those with private jets in Nigeria include:

Aliko Dangote is the richest black man on the earth and the 67th richest individual in the world, with a net worth of more than $12 billion. These titles are backed up by his extensive business network, which spans the globe.

He has also maintained his position as Africa’s richest man, according to Forbes. It should be mentioned that, while this business mogul has his fair share of private aircraft, he does not have the same number of jets as politician Orji Kalu.

Mike Adenuga’s fleet of private jets comes as no surprise given that he is Nigeria’s second richest man and the wealthiest Yoruba billionaire.

His riches in Nigeria is second only to the Almighty Dangote, as he owns Globacom Nigeria and several other commercial networks.

In reality, Mike Adenuga has landed on the Forbes list several times. His jets include the Falcon 7X, Bombardier Global Express XRS, and Bombardier Challenger 604.

This former governor of Abia state is one of the wealthiest politicians, having amassed so many private jets during his tenure. The Gulfstream G650, one of his five private jets, is estimated to be worth somewhat more than N11 billion.

His other aircraft include three Gulfstream IVs and one Bombardier Global EXP XRS.

Davido is also a private jet owner in Nigeria’s music industry. Being the son of Nigerian billionaire Adedeji Adeleke has proven advantageous to Davido. The Nigerian musician is the country’s youngest private jet owner.

With a Bombardier Challenger 605, it’s no surprise that he can afford to flaunt his lavish lifestyle on social media.

With his wife as a senatorial district representative, it’s no surprise that this political tycoon is a private jet owner in Nigeria, with two private aircraft worth billions of Naira.

Rotimi Amaechi, the former governor of Rivers State, has been known to purchase an Embraer Legacy plane produced in Brazil, which he claims is for the state government, but he uses it as his own personal property

Folorunsho Alakija is one of Nigeria’s few female jet owners. Her oil business network has amassed a significant amount of riches for her over the years, giving her a net worth of $1.2 billion.

According to Forbes, she is Nigeria’s richest woman, Africa’s second richest woman, and the continent’s second most powerful woman. With all of these talents, it should come as no surprise that she can afford her own private jet. Her private jet is the Global Express XRS.

Bishop David Oyedepo is one of Nigeria’s wealthiest preachers. He is the General Overseer and founding pastor of Living Faith Church, also known as Winners Chapel. His church is one of the largest in Nigeria, with local and international branches. He is said to own four private planes, including a Bombardier Challenger 604, a Grumman Gulfstream I (G-159), a Gulfstream IV (G-IV), and a Gulfstream V. (Gee-5).

Eze, the billionaire from Anambra state, has been a billionaire for over three decades. He is a billionaire in US dollars, not Naira. If you are a billionaire in dollars, you are most certainly wealthier than several Nigerian state governments. Arthur Eze owns a Bombardier Challenger to boost his investment ventures in Nigeria and across Africa.

Pastor Ayo Oritsejafor founded “Word of Life Bible Church” and served as the previous president of the Christian Association of Nigeria (CAN). The priest is hardly alone among Nigerian pastors who possess private jets. He has a Bombardier Challenger 601, which he received as a gift. The private plane, on the other hand, costs $40 million.

It was rumoured that the jet was given to him by a senior government official during Goodluck Jonathan’s administration. The bombardier challenger 201 is an upgrade to the “600 series,” with a longer range of 3784 miles and a top speed of 528 mph.

As a private jet owner, the founder and general overseer of Christ Embassy did not escape our search. The acclaimed man of God possesses a private jet that was given to him by a church member.

According to the article, the pastor received the aircraft as a gift from the Loveworld Music and Art organisation, an arm of the Believers Loveworld Ministry founded by the ministry to produce gospel music.

It’s astonishing to see another billionaire on the list, indicating that having a private jet is a big deal that needs a lot of money.