Are you preparing on taking a flight soon? We understand how frustrating it would be to get at the airport and discover that you are unable to bring everything with you. Moreover, prior to actually boarding a commercial aircraft for any of the Nigeria’s internal flights, you ought to be conscious of the forbidden items that are not permitted in your belongings. So, in order to help you deal with the situation that traveling may bring, we’ve put together this article, that will guide you over what you can bring in your carry-on luggage and what you can’t. 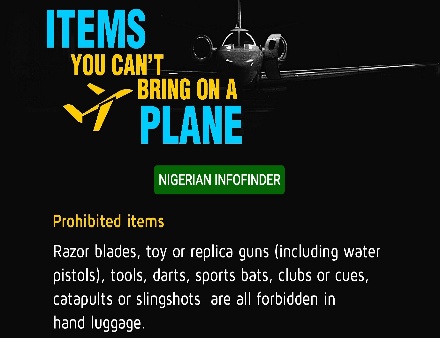 The Federal Airport Authority of Nigeria (FAAN) has specified the things that are prohibited on domestic flights in Nigeria. We have classified them so you will not spend time to get them down.

Firearms all seem to be weapon systems used to kill when fired. They have the ability to mortally hurt or kill another person, animal, or even oneself (suicide). In Nigeria, firearms are however banned on domestic flights.

The following are not permitted in this category:

These are things, weapons, and equipment that, when it is used incorrectly, can inflict injury or death to people. Except for hypodermic syringes accompanied by a medically indicated certification.

Sharp objects such as the ones listed below are not permitted:

Several sporting tools or accessories could be used to injure others, and these are forbidden goods that would be impounded at the SRA or ESRA.

They are as follows:

Martial artists and other fighters will be unable to take a domestic flight with their fighting/defence equipment because they are not permitted in the SRA or ESRA.

The FAAN officers may seize the following defense items:

Military-grade exploding armor piercing ammunition and other explosives will not be admitted at the SRA in this classification. Any object with the explosive or flammable emblem on it, indicating that it can cause an explosion, will be prohibited.

Prohibited things here under the classification include:

This classification includes items that can catch fire and are extremely dangerous. As stated by FAAN, combustible objects cause injuries that usually result in death and are therefore not permitted on any Nigerian flight.

The following are examples of combustible items:

All of those are illicit or non-medical hard drugs of any kind or substance that can modify, affect, or change people’s moods or behavior.

Except if you offer verifiable legal verification from a recognised health institution, which will be thoroughly checked by the Federal Airport Authority of Nigeria and other relevant organizations, there is an exemption.

Highly toxic chemicals that can cause harm when swallowed, sprayed, or applied, such as chlorine for pools and spas, compressed gas cylinders, and liquid bleach

IS IT PERMISSIBLE TO BRING A LIGHTER ON A PLANE?

Almost all varieties of traditional cigarette lighters are permitted in checked luggage and on board during a flight. Ballpoint pen lighters and other disposable lighters fall under this category.

Electronic, arc, and plasma lighters, on the other hand, would be prohibited in most countries.

IS IT PERMISSIBLE TO BRING MATCHES ON A PLANE?

Absolutely, most airlines will let you bring one book of safety matches onboard with you.

IS IT POSSIBLE TO BRING A LAPTOP ON A PLANE?

No trouble at all. Even if you don’t plan on working, we encourage bringing your laptop. Packing it with your other belongings may result in damage, and in rare situations, it may even be lost.

IS IT OKAY IF I BRING RAZORS AND SCISSORS ON A PLANE?

On flights, tweezers, razors, and scissors are generally permitted.

Straighten razors are the only object that you are not allowed to bring in your carry-on luggage because they could be weaponized. Furthermore, the edges of your scissors should be less than 12 cm long.

IS IT POSSIBLE TO TAKE KNITTING NEEDLES ON A PLANE?

Knitting needles are generally permitted in carry on luggage by most flights. The airport security agents, on the other hand, would really be informed of this. Security officials, on the other hand, have the power to exercise judgment and may opt to seize them as “sharp objects.”

Impermissible objects, weapons, and dangerous commodities are among the items that cannot be transported onboard an airplane. If you have any of these goods in your carry-on luggage, you must relinquish them at the airport security checkpoint.

This post summarized the entire list of these items in order to keep you informed on what to bring on an airplane.

If you’re unsure whether anything can be carried onboard, call your airline before you go to the airport. You may be able to pack the item in your checked baggage in some situations.

Meanwhile, hypodermic equipment such as medical syringes, domestic needles, and other items are exempt. Despite the fact that they must be legally certified by the government or authority concerned.