Nigeria has over the last two decades experienced an upsurge in criminal and violence issues. The country has been hit with a wide range of crimes thus making some Nigerian cities dangerous to live in. The contributing malicious activities to  increasing crime cases include insurgency, robbery, kidnapping, cybercrimes, political unrest, militancy, and other miscellaneous crimes. 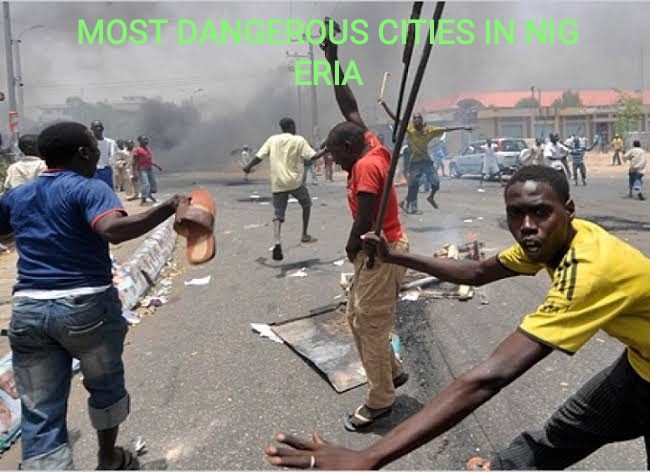 As much as the government has been trying to alleviate these issues in the most affected areas, there are some places that are still not completely safe. This write-up will highlight the top 10 of these dangerous cities in the country.

If you’re looking for a place to avoid in Nigeria, then this article will give you a view of the most dangerous cities that are unsafe this 2021.

Maiduguri, the capital of Borno state, is attributed as the most dangerous city in Nigeria, due to the prolonged activities of the insurgent groups. Moreover, there was a kidnapping activity by Boko Haram which led to the abduction of 219 students from Chibok secondary school in Borno state. The government isn’t silent over the security issues in Borno state. However they moved the defence headquarters to the city of Maiduguri, so as to help oust insurgent groups out of the country.

Borno state has been the nucleus of Boko Haram insurgency in the country. This extremist group has made a lot of violent activities ranging from attacks, killings and abductions on communities in Borno state. This has resulted in the state having the highest casualties to the terrorist group menace.

Lagos is no doubt the most commercial urban city in Nigeria. There are lots of economic activities going on in the state. However, there are places in the city that are notorious and unsafe. Some areas in Ikeja like computer village and under bridge Ikeja, there is a high case of pick-pocketing and armed robbery in those areas.

Another dangerous area in Lagos is Mushin which is a place known for cultism and armed robbery. The residents of the notorious part of the area have been experiencing these crimes especially at night. Other areas to stay guided in Lagos include Bariga, Oshodi, Mile. 2, Ajegunle and other areas.

Damaturu is another dangerous city to avoid traveling to. Yobe state that has been greatly affected by insurgency. The state is located the same with Borno in the North Eastern part of the country. Damaturu is the capital city of Yobe and the town has experienced a lot of violent activities from extremist groups.

The Boko Haram sect has made many bomb explosions in communities and markets in Yobe state. With more than 10,000 people killed from insurgency in Yobe state, it is categorized as the third most dangerous place to travel to in Nigeria.

Kano city is among the unsafe cities in Nigeria to avoid. The state has its capital in Kano, which is the most commercial city in northern Nigeria. Aside from the petty crimes in Kano, the major issue in the city and state is being subjected to physical attack because of your religion, skin color or ethnic origin.

The issue of insurgency had been a security issue in Kano. The activity of Boko haram extremists have resulted in the death of thousands and destruction of properties worth millions in Kano. Though these insurgents have reduced at present, there are some mild crime issues still going on in Nigeria’s populous city.

Ibadan is a commercial city in the south-western part of the country. The city is the second most populated urban area in the region. With large numbers of people living in the Oyo capital city, it has experienced some mild crime cases. The leading crime issue is corruption and bribery.

Other worrying issues in Ibadan includes being mugged or robbed, car theft, worries of being attacked , crimes associated with using or dealing drugs, and property crimes such as vandalism and theft .

Edo state capital, Benin city is to some extent among Nigeria’s most dangerous cities. However, there are some crime cases that happen in some parts of the city, mostly at night. If you’re visiting the city, it’s advisable to avoid sight-seeing during this time. Even some familiar areas in Benin turn dangerous as colours fade. It’s also important to avoid quiet, dark and lonely areas of the city.

The level of crime in Benin city is moderate. The recurring crime cases in the city include property crimes such as vandalism and theft; violent crimes such as assault and armed robbery; and corruption and bribery which is very high in the country at large.

Port Harcourt is an industrialized urban area located in Rivers State. The city has millions of occupants and this has adversely affected the security of the place. The level of crime in Port Harcourt is over 80%, and the crime has been increasing in the past years. The frequent security threats in the area include robbery, assault, cultism, militancy, crimes related to using or dealing drugs, property crimes such as vandalism and theft. There is also a high case of corruption and bribery which is very common in Nigeria.

Bauchi state has experienced the activities of insurgency since 2010 when it was at its climax. The menace has been a bit reduced the following years. It’s capital city, Bauchi has been one of the major targets of Boko haram extremists. There had been several successful attacks in some areas of the city. Sadly, not fewer than thousands of people in Bauchi has lost their lives to terrorism. All of these have made the Nigerian tourist destination to be quite unsafe.

Aba is a dangerous city in the south-eastern region and a commercial city in Abia State in South-eastern Nigeria. The town is seen as the most remote urban area in the state. There have been numerous crime issues in Aba. Most of them include robbery, cult activities, political unrest, vandalism, corruption, and others. In a bid to curtail the activities of crimes in Aba, the government had set up vigilantes to address these issues.

Yola is the capital city of Adamawa state located in the North Eastern part of Nigeria. Though there have not been many crime cases in the region aside from insurgency. The menace of the Boko haram sect in the state has made the city one of the most dangerous in the country. The extremist group’s activities has led to the destruction of villages, markets and churches in Adamawa state.

That’s the view of the most dangerous cities in Nigeria. This report is based on the crime rate in various parts of the country.