Nigeria is endowed with a number of highly developed states. You are guaranteed to encounter spectacular scenery of some of the top cities in these States as you journey around the country. They have the best road networks, as well as outstanding high-rise structures and aesthetically pleasing landscapes. In every geopolitical zone of the country, there are a few States that are far advanced of the rest in terms of development. We’ll be looking at the most developed states in particular. 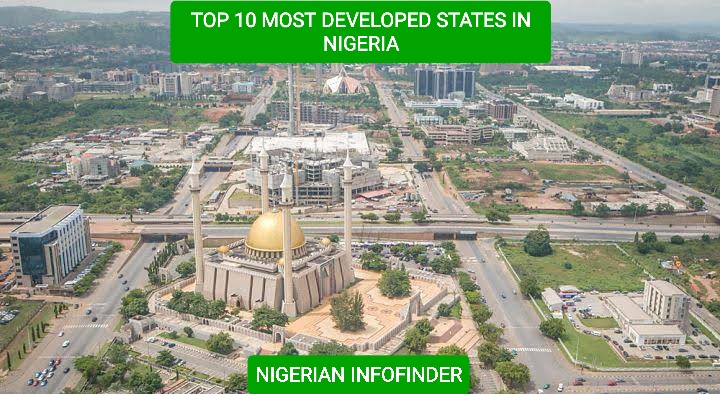 The leading most developed states in the country include the following:

Lagos is obviously the most developed state in Nigeria, with a citizenry of over 20 million people and functioning as the country’s economic hub.

Despite being the slightest state in the country, Lagos remains the most economically important, with many of Nigeria’s largest corporations headquartered there.

Although the Federal Capital Territory of Abuja is not formally a state, its status as the nation’s capital justifies its inclusion on this list. Apart from Lagos, Abuja is undoubtedly the most advanced city in the country, owing to the Federal presence there; after all, it is the seat of authority.

Kano State, located in northern Nigeria, is another productive state in the country. The state was established on May 27, 1967. Kano, in the country’s northwestern area, is one of the most developed states in the region. Agriculture is a major industry in the state, with food crops being grown and exported.

Kano has long been a commercial hub and one of Nigeria’s largest metropolitan regions, second only to Lagos. Textile, tanning, footwear, cosmetics, plastics, and enamelware are some of the industries found in the state, which is the largest in Northern Nigeria.

Rivers State is the sixth most populated state in Nigeria. The state is as well one of the most developed states in the country.

Port Harcourt, the state ‘s capital and largest city, is economically vital as the oil industry’s hub. The city has a lot of infrastructures to give the state this position. The proceeds from crude oil sales have been put to excellent use in the construction of infrastructure, including good road networks and bridges, particularly in Port Harcourt, the state capital, as well as improvements in primary health care and education. The state’s capital is also well-lit at night to showcase the city’s magnificent environment and aesthetic prominence.

Anambra State is among the most populous states in Nigeria’s south-eastern region. The state of Anambra is often referred to as the commercial center of the south eastern part of Nigeria. Much of that is attributed to the fact that the state has an internationally recognized market in Onitsha.

Onitsha, a historic harbor city from pre-colonial times, is one of Anambra’s metropolitan areas. Anambra is also one of Nigeria’s oil-producing states.

The state of Akwa Ibom is likewise well-developed due to a lot of infrastructural frameworks there. The state generates a lot of money internally (mainly because it is the country’s largest crude oil producer), which has helped fund many of the infrastructure projects that have changed the state for the better.

With adequate road networks and primary healthcare, Akwa Ibom State is a nice place to visit, and it is host to Nigeria’s top football stadium. The Allianz Arena is modeled after the Godswill Akpabio Stadium in Uyo. There are many other world-class structures to see in the oil-rich state.

Ogun State, which borders Lagos State, is a major production and commercial hub. The state is however known for its numerous job prospects, particularly for specialists and young individuals seeking ideal places to begin their careers.

In Ogun State, there are adequate road networks and a growing number of job prospects. The people’s general standard of living is likewise high.

Another significant state in Nigeria with well-developed infrastructures is Oyo. In addition, the state is host to the very first Nigerian university, the University of Ibadan, which gained complete autonomy from London shortly after the country’s independence.

Countless high schools, multiple universities, numerous attractions for visitors from all around Nigeria and beyond, and chances for persons keen in agriculture abound throughout the state.

Enugu is also one of Nigeria’s most populous states. In 1991, the state was formed from a portion of the former Anambra State.

Enugu State is primarily rural and agricultural. The state has a multitude of markets, particularly in each divisional headquarters, the most notable of which is the Ogbete major market in Enugu, the state capital.

Abia is a state in Nigeria’s south-eastern region, and it is one of the country’s most industrialized. Umuahia is the state capital, while Aba, previously a British colonial administrative enclave in the region, is the largest commercial hub.

Aba, the state capital of Abia, is a well-developed city. It is one of the most industrialized cities in the country’s south-eastern region.

That is the viewpoint of Nigeria’s most developed states. The following are some of the elements that influence the level of development in the states in which we have placed a strong emphasis on. Their relative internally generated revenue (IGR), gross domestic product (GDP), power supply, educational standards, access to safe drinking water, federal allocation to these States, healthcare system quality, and outstanding road networks, to name a few.

That’s the size of this write-up on the top ten most developed states in Nigeria. We believe you now have a picture of where to visit in the country if aesthetic development is your priority.