Are you interested in learning more about states that offer state allowances to service members? This article outlines the ideal states that provide NYSC allowances that you should think about while choosing a state for your NYSC service. 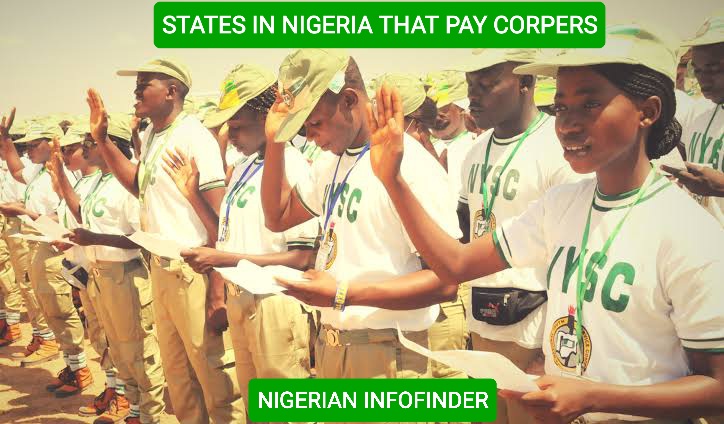 The following is a list of Nigerian states that will offer monthly stipend to youth corpers in 2021:

Lagos State, Nigeria’s trading hub, is at the top of the list of governments that provide state allowance to corpers.

Lagos state is the best place in Nigeria for NYSC for most corps members, owing to the presence of major international firms in Lagos.

Unfortunately, it is very competitive, and being sent to Lagos is more by chance than choice. But one thing is certain: if you volunteer for youth service in Lagos State, you will receive a stipend.

During their primary duty in Lagos, a Corp member receives an average of ₦30,000 per month.

Corpers can also take advantage of a variety of options available in the state.

Even so, in order to be considered for this promotion, you must be one of the 1st 100 fortunate corpers. As soon as you receive your PPA letter, hurry to Alausa Secretariat, Ministry of Special Duties, to get your number, as it is a limited number of slots available.

According to investigation made by reputable sources, Anambra State is the highest paying state in Nigeria, aside Lagos. The South-eastern state pays corpers serving in public offices a monthly salary of ₦8,500, minus the usual ₦19,800 reimbursed by the Federal government.

The state of Akwa Ibom comes the third place on the list of the Nigerian states that pays NYSC youth corpers. This is a coastal state located the South-eastern part of the country. This state gives ₦5,000 per month to corps members who are stationed in the state and serving at a public facility.

Jigawa gives 5,000 Naira per month to all youth corpers and ₦1,000 bimonthly to non-medical corpers, for so many individuals who are unaware.

Doctors, on the other hand, are paid ₦53,000 biweekly by the state (Medical and Veterinary)

Apart from doctors, all other health employees are paid ₦26,500 biweekly.

Based on our study, we’ve established and can affirm that Delta state pays ₦5,000 per month to corpers who work in government establisments.

Zamfara state pays all corpers a monthly stipend of ₦5,000. This is one of the highest amount in the country.

This state now makes a monthly table payment of ₦5,000. This amount is paid to all of their youth corpers.

Bayelsa state only gives ₦3,000 per month to individuals in town and 5,000 naira per monthly to corpers whose PPA is near water.

Except for the standard ₦19,800 Federal government allawee, this state provides all corpers a monthly stipend of ₦5,000. Every four months, they are given ₦20,000. It was in February of this year that they last got such a stipend.

Also in the list of Nigerian states that pays youth corpers is Katsina State.

Oyo state is also in the list of states that pays their NYSC youth corpers.

This state pays a monthly salary of four thousand Naira (₦4,000) in a very consistent manner.

Sokoto government pays three thousand, seven hundred and fifty naira (₦3,750) per month to corpers working in government establishments, but you’ll only be entitled to get it at the close of your duty year. Your account will be credited with a total of ₦45,000.

Enugu State Government is paying corpers in the town (Enugu North, Enugu East, Enugu South) just ₦1,000 per month, whereas those working in the localities get paid ₦3,500 each month (villages).

Taraba state also makes the list as they compensates their service members.

The state of Adamawa compensates NYSC corps members who are posted to their state during the POP with a monetary reward of ₦20,000.

The Ebonyi state government only paid NYSC corps members sent to their state ₦9,757. This reimbursement was just for a few months, beginning in October 2018 and ending in February 2019. They haven’t paid a single corper since then.

The last on the list is FCT Abuja. Despite the fact that Abuja is the nation’s capital, the Federal Capital Territory of Nigeria does not offer any allowances to corps members.

Nevertheless, it is so much simpler to make money as a corper in Abuja, because there are many large corporations where you can serve, and those large organizations offer large allowances to corps members who serve there.

Looking to go for your one year youth service soon? Then this article is specially for you, as it highlighted the leading Nigerian states with respect to allowance payment for NYSC youth corpers.

Moreover, there are usually the utmost states for doing NYSC service when it comes to the National Youth Service Corps (NYSC).

Spite of the growing in the NYSC allowance, it’s natural to want to stay up to speed on the states that provide youth corpers allowances so you can supplement your income.

The leading states in Nigeria that provide state allowance to corpers were examined in this article, as well as the amount they pay. Ultimately, it will assist you in determining which state is the most ideal option for your NYSC service.