Armed robbery in Nigeria, which has been prevalent since the 1970s, continues to be a criminal conduct that endangers the lives and property of individuals. Despite the fact that the act has been justified by a lack of job, low income, inflation, police troubles, underdeveloped infrastructure, and changes in social norms, armed robbery remains a felony punished by law. 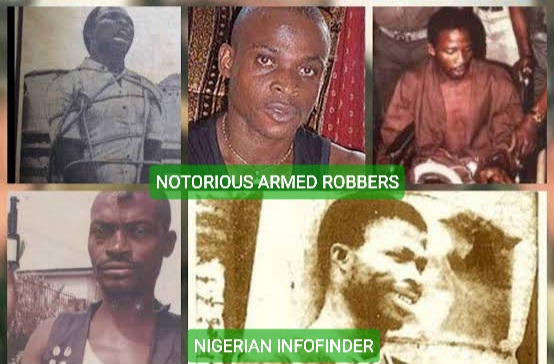 Some armed robbers endanger human lives by using guns and committing rapes, among other crimes. Armed robbery has no borders, with criminal attacks occurring in every part of Nigeria.

In this post, we will discuss the ten most dangerous and legendary criminals and armed robbers in Nigerian history.

Those who had previously faced Shina Rambo’s attack would never forget him. He is similar to other well-known crooks, and he was also an armed robber. According to several tales, he and his group were capable of looting an entire highway.

Meanwhile, while some sources claim he died during surgery, others claim he died as a normal person. For protection, he was well-endowed with charm and dark magic. While driving on congested highways, he was recognized as a demi-god. Until the day he encountered his waterloo.

Derico Nwanmama, true name Okwudili Ndiwe, was crowned King of the Underworld. Residents of Onitsha, a commercial hub in Anambra State, were the ones who bore the brunt of his wrath.

According to accounts, Derico allegedly murdered over 100 people, including approximately 25 police officers. He was regarded as a ruthless armed robber who robbed buses alongside gang members. Derico and his gang members were apprehended by the Anambra State Police Command. While some of his group was apprehended, the leader remained on the run.

However, he did not run for a long time as a member of the Bakassi Boys, a well-known vigilante service group formed to combat crime in the South East, In 2001, authorities apprehended the lethal criminal. Derico Nwanmama was paraded around Onitsha by the Bakassi Boys before being killed in an open area.

Doctor Ishola Oyenusi was the country’s first known armed robber. He swept the country by storm shortly after the Civil War ended in 1970, committing numerous crimes and mayhem against humanity. Before he was executed in 1971, at the legendary Bar Beach concert in front of 30,000 Nigerians, no one believed The Doctor, as he was known to be invisible, would be apprehended. When Ishola Oyenusi was at the pinnacle of his authority, he stated, “The bullet has no power over me.”

Ishola Oyenusi began committing robberies in 1959, but his first major heist occurred when he seized a car along Herbert Macaulay Road in Yaba, Lagos, killing the owner in the process, all because his fiancée was broke and needed money to buy make-up. Ishola Oyenusi had evolved into a cold-hearted armed robber who delighted in inflicting misery on his victims at the conclusion of the Civil War.

In March 1971, he was caught during a robbery in Ikeja, Lagos. Doctor Ishola Oyenusi’s execution was welcomed by relieved Nigerians who flocked to Lagos’s Bar Beach to see the end of a man who had held the country hostage. He kept smiling while being strapped to the drum for death. He smiled all the way to the grave.

Anini, who was born in the 1960s, was also an infamous thief who plagued the Bendel state, which is now Edo. Although he largely tormented Benin City, the state capital in the 1980s, his robbery became a national concern in 1986. He had an insider who fed him information, and their arrowhead was Deputy Superintendent of Police George Iyamu.

Anini, also known as ‘The Law’ or ‘Ovbigbo,’ was known in Benin motor parks as someone who could control the various competing interests of motor park touts. He quickly rose through the ranks of gangs, criminal godfathers, and thieves as a driver and transporter. Later, he formed his own gang and expanded to the east and north of Benin.

He was known to have slain nine police officers in three months. Kayode Uanreroro, the Superintendent of Police, put an end to Anini’s reign of terror after multiple hunts. Anini was caught in 1986, on the 3rd of December

Uanreroro shot An­ini’s right toes and left ankle in an attempt to flee, and he was sent to a military hospital and had one of his legs amputated. Police recovered a variety of charms.

Anini was confined to a wheelchair throughout his trial due to the amputation of his leg. “Anini will long be remembered in the history of crime in this country, but it will be of unblessed remembrance,” Justice Omo-Agege said in his decision. Few, if any, people would give the name to their offspring.” On March 29, 1987, he was executed.

Mighty Joe entered the criminal scene shortly after the death of Oyenusi, just when Nigerians thought they were free of criminal deeds. Unlike the aforementioned, Mighty Joe’s group featured ex-soldiers who were experts with firearms. He not only stole and killed in the South West, but he also kidnapped people. He was said to be more lethal than Oyenusi. His capture, on the other hand, did not require much effort because he was recognized by one of his victims, who contacted the police. He was apprehended by police and later executed.

Abiodun Egunjobi, alias Godogodo, a 36-year-old slum youth who rose from the slums to become the leader of a gang that defied logic by striking with precise accuracy, killing without mercy, and terrorizing Lagos and the south-west with reckless abandon.

He ascended through the ranks of a gang of thieves that wrecked devastation across Lagos State and parts of Ogun, where his crimes were committed, beginning in the slums of Abule Egba.

Godogodo and his gang rose to prominence as a result of their illicit activities, landing them on the Police Department’s Most Wanted List. During his armed robbery activities, he is claimed to have killed over a hundred police officers as well as a considerable number of civilians. He was captured on August 1, 2013, after escaping officials in the United States for more than a decade.

Chief Vincent Douro, better known as Otokoto, was charged with humiliating ritual murder. When he died, his son, Obidiozor Duru, reigned as king of the dreaded Black Secret sect, which was responsible for thefts and kidnappings of children in Owerri, Imo. Following suspicions about the Otokoto family’s malign actions, the city of Owerri placed the Otokoto family under surveillance and radar.

“There is no smoke without fire,” as the proverb goes. Even when the wind blows, the bird’s airways stay clear. Otokoto was charged on September 19, 1996. Outside, filthy linens are being washed, and the elegant hotel, the Otokoto Hotel, is being dismantled. A ritualist who robs and murders people for ritualistic purposes, as well as a hitman, abduction, loan sharking, and other illicit activities. He is of Igbo descent.

He was the senior cop who helped Anini’s career succeed. He was a high-ranking armed robber dressed in a police outfit. He provided intelligence and weapons to Anini’s group. He was the third member of Anini’s Gang and the seventh in Nigeria’s Armed Robbers history book.

Gracious David West, also known as the Port Harcourt Serial Killer, is said to have had a difficult childhood. He stated that his mother had been poisoned and that as his father’s only son, much was expected of him, but he was unable to provide. As a result, he became involved in criminal activity.

He was a member of Deebham, a fraternity known in Nigeria for committing acts of violence and mayhem. His method of operation was always the same. Every night, he scouts for girls at local clubs in Port Harcourt. He lures them to a local motel in a city suburb, sleeps with them, and suffocates them to death.

His victims were invariably discovered with white cloth wrapped around their legs. Gracious admitted to killing at least 15 women in three months prior to his arrest on September 19, 2019, while attempting to depart the city of Port Harcourt.

Kayode Williams was a lethal armed robber who allegedly killed people without hesitation. While confessing to his crime, Kayode Williams detailed how he hammered babies for spiritual fortification. Kayode Williams became a Christian while incarcerated for more than ten years. That is, after committing multiple crimes against humanity, he was sentenced to life in prison, but after ten years in prison, he became a converted Christian and a born-again Christian.

This is a list of Nigeria’s most notorious armed robbers in Nigeria’s history. However, these are only a few of them; there are many thousands more that have yet to be discovered.