Museums will undoubtedly be your first choice if you’re a visitor or need a place to explore interesting historical and valuable artifacts. You should also think about these locations for exhibition and exploration. So many historical relics and things can be found at these museums. All of these artefacts can help with research, serve as a reference, and broaden your horizons to old artifacts. 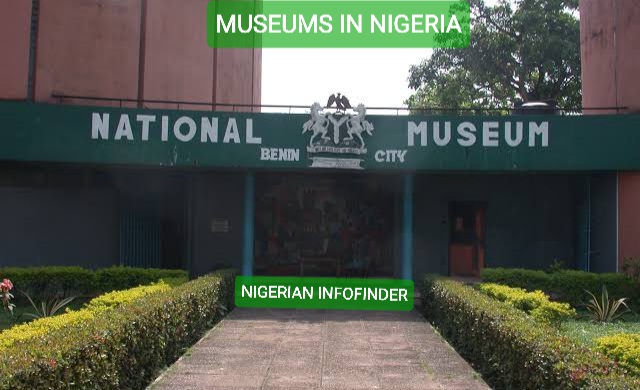 Are you ready to investigate these historical artifacts? In Nigeria, there are around 40 accredited and acknowledged museums. However, in order to help you choose the best ones to visit, we’ve compiled a list of Nigeria’s top ten most popular museums.

The ten best and most popular Nigerian museums to visit are listed below.

The National Museum in Lagos is precisely located in Onikan area of the state. It is one of Nigeria’s oldest museums. Overall, it is the best museum to see this year as a tourist. It may be found in Onikan, Lagos.

The Mercedes Benz Saloon Car driven by the former military head of state, General Murtala Muhammed, is one of the artifacts on show in the museum’s exhibition. The automobile serves as evidence and displays bullet holes, reminding us of Murtala’s 1976 assassination.

The Badagry Heritage Museum receives the most visitors due to its colonial history. The district of Badagry was where the British sold or traded slaves. It was founded in 1863 in Badagry, Lagos state, and is Nigeria’s and Africa’s largest museum.

This museum contains a sufficient number of artifacts that serve as reminders of one’s ancestors. The Badagry museum has iron chains, briddles, canons, guns, and other slave goods on display. Badagry also saw the construction of Nigeria’s first multi-story structure.

The Esie Museum is regarded by many as the oldest museum in Nigeria. Its history can be ascribed to a hunter. It is an old museum that is still operational today. Esiẹ Museum is located in Kwara State and was established in 1945.

There are several fascinating historical relics on display in the Esi Museum’s gallery. The stone statues in this exhibit are said to date from 400 BC. It’s no surprise that tourists and researchers are drawn to this Nigerian museum.

The Esie Museum additionally has two types of galleries that house over two thousand objects. According to reports, a festival honoring the museum’s many monuments is held every March.

The Jos Museum is just another prominent museum in Nigeria that you can explore for study. This tourism and educational destination is located in Jos, Plateu State’s capital.

The Jos Museum was established in 1952 and houses several works of art that date from the colonial era to Nigeria’s pre-historic period.

The Nok terracotta heads, which date back to 500 BC, are one of the archaelogical relics on show. The museum gallery also houses documents from colonial periods.

The National War Museum, located in Umuahia, Abia State, is a popular tourist destination in Nigeria. The museum was founded in 1985.

Completely distinct artefacts from the Nigerian Civil War between Biafran soldiers and the Nigerian military are on showcase at the National War Museum in Umuahia. There are armaments such as battle tanks, guns, and aircraft.

Another of the top museums in the country is the Benin Museum. It really is one of the most important historical tourist attractions. This college, located in Benin City, Edo State, was founded in 1973.

Artefacts of the original Benin bronze statues, shackles, and other slave artifacts are on display in the Benin City National Museum, giving you a sense of the former Benin Empire.

This museum in Calabar is another of Nigeria’s oldest museums that draws visitors and tourists from all over the world. It’s in Calabar, the state capital of Cross River.

According to legend, the Old Residency Museum was built in 1884 during colonial period.

In reality, the museum used to be the colonial government’s headquarters. It is currently a hub that houses well-preserved antiques from colonial and pre-colonial ages, as well as relics from Calabar’s slave trade past and other significant artifacts.

The Gidan Makama Museum is widely considered as being one of Nigeria’s oldest museums. It is one of the many monuments that our country has to offer. Kano state is home to this national treasure. It was the former palace of the Emir of Kano and has many important art crafts, sculptural collections, historic items, and so on. It dates back to the 15th century.

When looking at the image, visitors can view the 11 galleries from the main entrance hall, which feature antique materials, relics from the old city walls, 19th century Kano, and artefacts recovered from the civil war, among other things.

Oron Museum is one of the nation’s main museums, having been built in 1959 before being looted during the civil war. It was not reconstructed until 1975, and it has since become a destination for individuals seeking to stay in touch with the history.

The Oron Museum provides a lot of information about the Nigerian/Biafran civil war. You can observe some historical artifacts and relics of the Civil War on display at Oron, Akwa Ibom state. Tourists and other researchers can see the bunker of Chukwuemeka Odumegwu Ojukwu, the first President of the Biafran Republic.

The Kaduna National Museum is one of Nigeria’s most prominent museums, located in the northern part of the country. It was founded in 1975 and is located in the state of Kaduna.

There are exhibits and archaeological treasures such as bronze statues, terracotta, and other carved works.

Other top museums in Nigeria that couldn’t make our top ten list include the following: