Influence and riches are the two things that pave the way to power, and this year’s list of influential politicians is no exception. The results of the poll of elections have altered the political landscape as we approach the general election in 2023. Top-tier politicians are getting ready to assume leadership roles in various capacities throughout the nation. There are several strong and important politicians in Nigeria whose influence have grown over time. The majority of these lawmakers participate in national decision-making. Who makes the decisions in Nigeria is the basis for this article on the nation’s most powerful figures. Although the list may appear biased, we rated these politicians based on a variety of variables, including their popularity, wealth, and power. 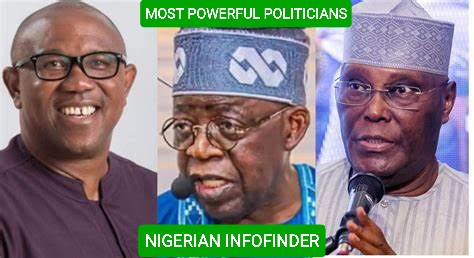 TOP 10 MOST POWERFUL POLITICIANS IN NIGERIA (2022)

Here are Nigeria’s most influential political figures as of 2022, listed in no particular order.

The most prominent politician in Nigeria, especially in the southwest, is Bola Ahmed Tinubu, also known as Jagaban. Tinubu was born in Lagos on March 29, 1952. Almost all of the south-western Yoruba states, including Lagos, perceive him to be authoritative. He is the Lagos State politician who has had the most success. He serves as a leader for both the APC and the Yoruba people. He presided over Lagos State as governor and senator, and he had a significant impact on numerous elections, particularly in southwest Nigeria. The estimated value of Tinubu’s net worth is $1.5 billion, and he is the current

The president of Nigeria at the moment is Muhammadu Buhari. He was chosen in the national election of 2015 on the platform of the All Progressive Congress (APC). He also serves as the Hausa/Fulani people’s leader. As the head of the national military forces, he has power not only in the north but also in the south. Considering the president’s military history and rigid nature, most individuals fear him. This makes us rate the president in the second place in our list.

A prominent Hausa politician with considerable influence is Rabiu Musa Kwakwanso. In particular, Kano, Kaduna, and some other northern states are familiar with him well. From 1999 to 2015, he served as governor of Kano state twice and did a good job. In addition to this, he has held a variety of political roles at the federal level of the nation. He served as the APC’s representative for Kano Central Senatorial District as a senator in the National Assembly in 2015. The New Nigeria Peoples Party’s (NNPP) national leader and presidential candidate for the 2023 general elections is Rabiu Musa Kwakwanso.

Among Nigeria’s most influential political figures is Atiku, a politician and businessman from Adamawa state. Between 1999 through 2007, Abubakar served as Olusegun Obasanjo’s vice president of Nigeria. He is not your typical politician in Nigeria. He has the distinction of having run for President of the Federation every year since 1993. Sadly, despite switching sides, he still lost every single contest. He is still a candidate for the general elections in 2023.

Peter Gregory Obi is currently if not Nigeria’s most powerful politician. Obi is such a powerful and influential political figure that almost all political parties frequently mention him. Obi will change the nation, according to his supporters or followers who call themselves “Obidients.”

Peter Obi served as vice presidential candidate in addition to serving as governor of Anambra state twice. Nevertheless, because he is the Labour party’s presidential flag bearer, the narrative has been elevated. The young people hold him in high respect as the candidate to lead the country.

Barrister Nyesom Wike, the governor of Rivers State, is undoubtedly the most opinionated politician with a significant impact on Nigerian politics. There is obviously no one else save him, despite the fact that there are several powerful governors. Their influence now reaches outside of their states and has a big political impact on the whole nation. This is especially true in light of the elections in 2023. One of them is Wike, the governor of Rivers State. It is becoming more and more clear that Wike is one of his party’s most influential politicians. One may witness this as everyone swarms around him.

Obasanjo is still held in high regard in the nation’s political community, despite the fact that his political power has decreased over time. The former military general goes by the names “OBJ” or “Baba” in society. Obasanjo, who was raised in Ogun State, is frequently referred to as Nigeria’s most successful politician. He has previously served as both a democratically elected president and a military head of state. All things considered, Obasanjo is a leader that is revered throughout the nation.

General Ibrahim Badosami Babangida, also known as “IBB,” is regarded as one of Nigeria’s most influential leaders. He was born on October 17, 1941, in Minna, Niger State. IBB once served as Nigeria’s military leader. He is seen as a powerful individual by those in the north.

Former president, Jonathan is the immediate past president of Nigeria. He was Nigeria’s president for six years before falling to President Buhari. Both many people love and despise him. The country’s south and south-eastern regions are thought to be heavily influenced by the former president.

Yakubu Danjuma comes in last on our ranking of the ten most powerful politicians in Nigeria. He is a multimillionaire businessman and politician from Nigeria. He served as the Chief of Army Staff of the Nigerian Army from July 1975 to October 1979. He is a leader of the Northerners as well as a well-known person in Nigeria.

Compiling a comprehensive list of powerful people in a country with as many ethnic groups as Nigeria is not practical. However, these political figures’ influence extends beyond their basic functions and positions. Additionally, it covers the entire nation. The persons who hold a position of authority define its limits. We recognized and featured some of the nation’s wealthiest politicians. These ten politicians on our list undoubtedly get their names from the decision making they have made. It doesn’t, however, give everyone’s power exclusively.