In Nigeria, there are many wealthy churches which are getting innumerable to take their numbers. Most of these religious houses are Pentecostal churches. Although, there is the Roman Catholic Church which leads the chart as the richest church in Nigeria and also in the world. 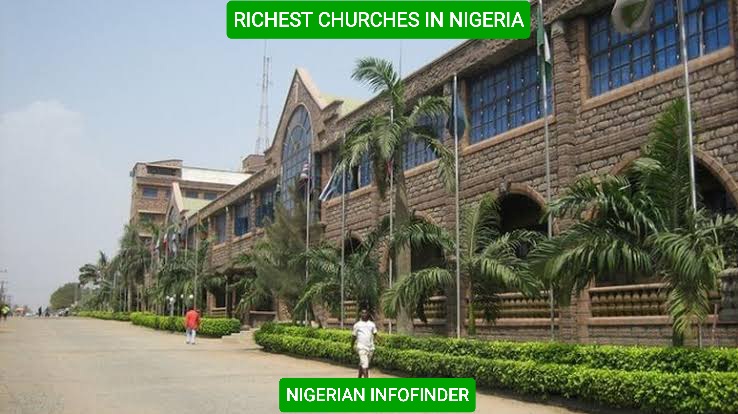 Inasmuch as churches are non-profit religious organizations, there are many who possess lots of valuables and assets. They gather these riches from the accumulation of their total assets. In no particular order, we will highlight the top ten richest churches in the country. Note that the list ranks them based on their resources, monetary worth, the number of branches and their congregation.

The following are the most richest churches in Nigeria as at this year.

The Catholic Church is obviously the largest Christian religious organization in Nigeria. Going by this fact, they are equally the most richest church in the country. Though the monetary worth of the Catholic church may not be made public, however online reports suggest that its estimated to worth over $150 billion.

The Catholic Church has the largest number of members in the country and globally. Looking at the stats, the estimated number of baptized members of the church in the country is about 23.5 million as at 2011.  Likewise, there are affluent individuals attending this church,  contributing to their wealth through freewill donations to cater for its missionaries.

The Redeemed Christian Church of God alternatively referred to as RCCG takes the second place in the list of the most richest churches in Nigeria. The church is rated as the most populated Pentecostal church in the country, having a large member population of around 3 million people.

The wealth of the Redeemed Church of God can’t be underestimated because of the kind of properties they own. This development stretches to the educational sector as they own outstanding and expensive institutions in the country. One of these is Redeemers University. The church additionally have personal luxury planes worth millions of Dollars.

Moreover, the Redeemed Christian Church of God (RCCG) have around 3500 parishes spread around different states in the country and furthermore have one of the largest assembly hall which can contain their members when they organize conventions.

While the Anglican Church of Nigeria holds the record of being the first church in Nigeria, they are also among the wealthiest religious organization in the country. Their existence can be traced back to the time of the British colonial rule, when the foreigners first preached Christianity to Nigerians.

In Nigeria, there are fourteen ministerial areas of the Anglican fellowship which are all headed by Archbishops who holds authority inside their individual territories. The “Primate of All Nigeria” is their head whose central command is in Abuja. There are some lower church heads like priests in local churches.

Living Faith Church otherwise called Winners Chapel International is one of the fastest growing churches in Nigeria. With that aside, its founder and overseer, Bishop David Oyedepo is the richest pastor in the country. The wealth is reflected in the properties and abundance they own.

Winners Chapel has a large number of members which has grown significantly in the last decade when they started. The number is continually expanding, perhaps because of the kind of worship in the congregation.

Among the resources of Living Faith Church International are universities owned by David Oyedepo. They include Covenant University and also the affluent pastor is among Nigerian ministers with private jets which he uses for his traveling to other countries to preach the gospel at church services.

BROTHERHOOD OF THE CROSS AND STAR (BCS)

Brotherhood of the Cross and Star is perhaps an unpopular Christian religious group. This has made them to be quite low in number when compared to other top popular churches.

Even as the stats isn’t that suiting, the Brotherhood of the Cross and Star (BCS) is one of the most richest churches in Nigeria. Indeed, the church boasts of rich men and furthermore have resources that runs into billions of Naira.

Basically, BCS was established in 1956 by their Leader Olumba Obu, in Calabar, Cross River State. The followers accept that its founder, Olumba Obu, is the Holy Spirit, so they call him god and Jesus. They believe in reincarnation and other customary African notions.

Deeper Life Christian Church is a prominent Christian religious organization that was established by Pastor Williams Folorunsho Kumuyi in 1973. The church is one of the famous churches in the country today and furthermore one of the most richest Nigerian places of worship.

Deeper Life Bible Church has an assembly hall which was once the largest worship center in Africa. It cost them about ₦4 billion to built and they have branches in each state in the country.

Christ Embassy alternatively known as Believers’ LoveWorld Incorporated, is a major church and a Christian group established in 1987 by Pastor Chris Oyakhilome. The prolific pastor is in Forbes list of the most richest pastors in the continent.

Christ Embassy Church’s central headquarters is in Lagos and has worship centres all through the country. The church has around 13 million members worldwide and is still growing. All these makes them to be one of the richest churches in Nigeria.

THE SYNAGOGUE CHURCH OF ALL NATIONS (SCOAN)

The Synagogue Church Of All Nations was founded by late T.B. Joshua. The church is widely known and it has two branches; one in Ghana while the base headquarter is in Lagos, Nigeria.

The church is very popular and the number of people coming to worship runs in thousands. The value of the resources of this congregation is purportedly assessed at ₦10 billion. This feat earned them as one of the most richest churches in the country.

The Lord’s Chosen Charismatic Revival Ministry was founded by Lazarus Muoka some years ago. The Christian religious organization is an enormous church that has cash and huge members base. The headquarter of the church is in Lagos and they have different branches in the generality of states in the country.

HOUSE ON THE ROCK

The House On The Rock Church is also one of the richest Christian religious organization in the country. Established by Pastor Paul Adefarasin, the church is a famous one and also one of the largest with good number of members.

That’s the view of the most richest churches in Nigeria. These religious organizations are rated based on their total assets, worth, number of members, stats and general impression.