The Igbos are known to be the most successful tribe in Nigeria due to their intelligence and business acumen in terms of commerce. They boast of many rich individuals who have been listed among the wealthy individuals in the country. As one of Nigeria’s most populous tribes, the Igbo are well respected, and their language is preferred by other small tribes from the country’s southern region. 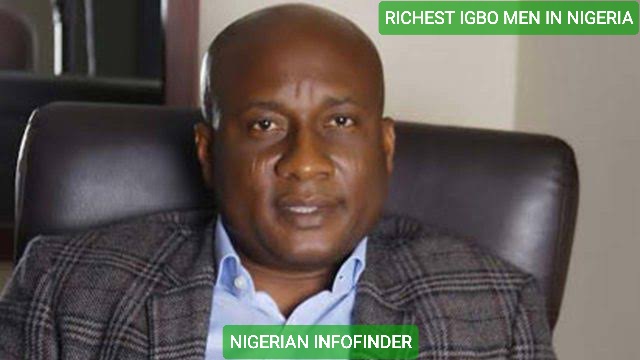 The following is a list of the top richest Igbo business men in Nigeria, along with their net worth:

Arthur Eze is currently Nigeria’s richest Igbo man. Arthur Eze was born on November 27, 1948, in Anambra State, in the Dunukofia Local Government Area. His secondary education was received at St. Augustine Secondary School in Nkwere, Imo State. He continued his education at a higher level by studying Mechanical and Chemical Engineering in the United States (California State University).

Following his education, he invested in the Nigerian oil and gas sector, and he is the CEO of the popular Atlas Oranto Petroleum, one of the largest private petroleum companies in Nigeria. All of his businesses have earned him a lot of money, and he is now ranked among the top richest Igbo men in Nigeria.

Former President Goodluck Jonathan bestowed upon him the distinguished award of ‘Officer of the Federal Republic (OFR)’ in 2011 in recognition of his contribution to the development of the nation’s economy and humanitarian gesture to the Nigerian people. In 2015, Enugu City Centre Rotary District 9142 named him “Outstanding Citizen of the World.” In 2018, he was honored with the coveted Zik Prize in leadership awards, receiving the ‘Zik Leadership Awards’ in the business category.

Cletus Ibeto, who comes from the state of Anambra, is also known as one of the richest Igbo men in the country. His investments reveal more about this businessman, who was born on November 6, 1952, in Nnewi.

Ibeto is the president of the Ibeto Group, one of the country’s largest conglomerates. This conglomerate is involved in real estate, oil and gas, automotive couplings, hospitality, banking and finance, cement, and other businesses.

You might be curious as to how Cletus Ibeto made his money. He began as an auto parts dealer, where he learned as an apprentice before becoming one of Nigeria’s richest Igbo men.

Benedict Peters, a wealthy businessman and philanthropist, was born in Ebonyi State despite his origins in Delta State.

Benedict Peters is the founder and CEO of Aiteo Group. Aiteo Group is a company based in the energy and gas sectors. He graduated from the University of Benin with a degree in Geography and Urban Planning. The company is not well-known among ordinary Nigerians, but it is a major player in the Nigerian gas sector, owning stakes in Oil Mining Lease 29 (OML) and the Nembe Creek Trunk Line (NCTL). Benedict Peters’ net worth is estimated to be $3.3 billion.

Allen Onyema is a patriotic Nigerian who has always advocated for Nigeria’s unity, despite the fact that the country appears to be divided with no hope of unity. Because he is constantly representing the country in positive news, he was named “Conflict Resolution Expert,” and in order to unite the country, he has tried his hardest to locate his business in every tribe found within Nigeria.

Allen Ifechukwu Onyema is a lawyer, entrepreneur, philanthropist, and the owner and CEO of Air Peace, Nigeria’s leading indigenous airline. Allen Onyema’s net worth is estimated to be $3.1 billion.

The Chrome Group’s Chairman is Emeka Offor. He is a Nigerian entrepreneur, oil magnate, and philanthropist.

In Delta, he found a new job with Rivways Lines Nigeria Ltd, a company that imports bitumen. While working for Rivways Lines, he met his mentor Pa Abadi, who encouraged him to learn the fundamentals of the business. Emeka began purchasing and distributing bitumen to small organizations with the assistance of Pa Abadi. Emeka Offor began supplying bitumen to larger organizations such as Julius Berger Nig. Ltd, Guffanti Nigeria Ltd, and Fougerolle Nigeria Ltd in less than two years.

He established the Sir Emeka Offor Foundation (SEOF) to “assist people in need in becoming self-sufficient and independent.”

The net worth of Orjiako is estimated to be $1.7 billion. Banking, shipping, insurance, health care, and real estate are among its assets and commercial interests. He also owns Neimeth Pharmaceuticals International PLC, a major pharmaceutical firm in Nigeria.

ABC Orjiako was a successful orthopedic and trauma surgeon at Lagos University Teaching Hospital and National Orthopaedic Hospital before establishing his own company.

Orjiako was appointed CEO of the Shebah E&P Company. It was an oil exploration company that owned 40% of an OML 108 licensed offshore block. This block is in charge of producing approximately 8000 barrels per day.

Ifeanyi Ubah is a Nigerian entrepreneur, investor, and humanitarian. He is also a senator in the Nigerian Senate, representing Anambra South Senatorial District. Ifeanyi Ubah was born in Nnewi, Anambra State, on September 3, 1971.

He is the CEO of Capital Oil and Gas Industries Limited, a significant part of Nigeria’s oil and gas industry that works in downstream tasks. In 2001, he founded the company. He also founded the Authority Newspaper.

Ifeanyi Ubah is also the owner of the Nigerian football club Ifeanyi Ubah F.C. He has five children with his wife, Uchenna Ubah.

Rochas Okorocha was born on September 22, 1962, in Imo State, and is a former governor of the state under the All Progressives Congress (APC). Rochas Okorocha was a philanthropist and businessman before entering politics, and he was named the richest politician in Nigeria in 2018. He was also a senator in the 9th Nigerian Senate, representing Imo West Senatorial District.

He is also the founder of the Rochas Foundation, an NGO dedicated to educating the underprivileged. The net worth of Rochas Okorocha is currently estimated to be $1.5 billion.

Tony Onyemaechi Elumelu is a Nigerian entrepreneur, economist, and philanthropist. He was born on March 22, 1963, in Jos, Plateau Nigeria, to Deltan parents. He is the chairman of Heirs Holdings and the founder of the Tony Elumelu Foundation. Tony also serves as the chairman of the UBA Group. Mr. Elumelu also has investments in real estate, finance, energy, agriculture, and health care.

Cosmas Maduka, CEO of Coscharis Group of Companies, began his entrepreneurial journey when he was six years old, two years after his father died. To support his mother, he dropped out of primary school and began hawking Akara, a popular Nigerian food staple made from beans.

Coscharis was one of ten motor companies chosen by the Nigerian government and granted an import license in 1982. This was the turning point in Maduka’s entrepreneurial journey. The Coscharis Group is now a $500 million conglomerate with subsidiaries in the Automobile Sales and Services, Petrochemical, Manufacturing, ICT, Auto care and Auto Components, Agric and Agro Allied business sectors.

The names listed above are not just wealthy but are also some of the most influential richest Igbo businessmen in Nigeria today.