For more than a half-century, this evil, embodied within the frameworks of patron-client relationships and vested interests, has been the cankerworm eating at the very fabric of the Nigerian State, preventing her from developing economically, socially, and politically within the paradigms of the modern liberal democracy she claims to represent. 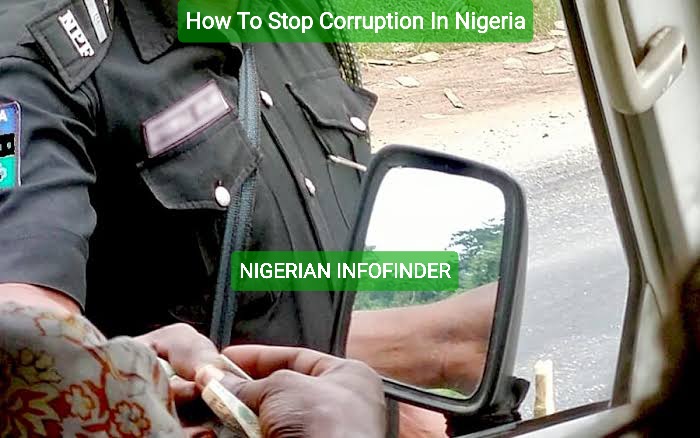 It is usual in Nigeria for wealthy men to bribe police officers to frighten their staff. The ruling elite are continually looting the country’s petrodollars at the cost of the general citizenry. Being a billionaire is practically associated with being a politician.

In a 2009 report by Transparency International (TI), According to a 2009 investigation by Transparency International (TI), multinational firms pay bribes to Nigerian politicians in the sum of $40 billion for their operations within the country. Since the country’s independence in 1960, an estimated $400 billion in oil income has been stolen or misappropriated.

In Nigeria, it is common to discover openly advertised “special exam facilities” where people can come and pay a price to ensure success in state-sponsored terminal exams. I could go on, but I think we all got the picture of Nigeria’s terrible corruption.

So, how can we put an end to something that has grown so commonplace that doing the right thing has become impossible?

There is no one-size-fits-all solution to fighting corruption. Many countries have made tremendous progress in combating corruption, but practitioners are constantly looking for answers and evidence of benefit.

HOW TO EFFECTIVELY STOP CORRUPTION IN NIGERIA

These are the best methods or ways to reduce the menace of corruption in the country today.

Effective law enforcement is important for punishing the corrupt and breaking the cycle of impunity, or freedom from punishment or loss.

A robust legislative framework, law enforcement agencies, and an independent and functional judicial system are required for successful enforcement tactics. Civil society can help the process by participating in efforts to curb corruption in Nigeria

The rapid growth of young people on Twitter and Facebook, as well as the increasing use of social media by millions of Nigerians, demonstrate the potential influence of technology and social media in stimulating debate and encouraging participation in the fight against corruption. Future programs may be able to use the power of social media to effectively put pressure on authorities.

However, boosting access to technology, social media, print, and digital media at the grassroots level is critical to ensuring that no one is left behind, while also including other practical low-tech communication tactics in engagement and outreach programs.

Strengthening citizens’ desire for anti-corruption measures and empowering them to hold the government responsible is a long-term strategy that contributes to the development of mutual trust between citizens and government. Community monitoring activities, for example, have in some circumstances aided in the detection of corruption, reduced budget leakages, and enhanced the quantity and quality of public services.

Transparency International (TI) created an interactive map that the public may fill out with images and allegations of probable election violations in order to monitor local elections. As a result, instances of public cash being misappropriated to assist specific candidates have been identified.

Involving religious and traditional leaders who, in most cases, have the authority and level to influence social norms can be an effective method of mobilizing citizens, though capacity building and group strengthening may be required.

Corruption must be punished as part of any effective anti-corruption effort.

Keep citizens engaged in the fight against corruption at the local, national, international, and global levels – in proportion to the scale and scope of the problem. Make use of the architecture that has been created as well as the engagement platforms that are available.

Corrupt public officials around the world would be unable to launder and conceal the proceeds of looted state assets if they did not have access to the international financial system. Major financial centres must rapidly implement measures to prevent their banks and cooperating offshore financial centres from absorbing illicit flows of money.

For instance, the European Union recently enacted the 4th Anti-Money Laundering Directive, which compels EU member states to develop registries of the beneficial owners of companies incorporated within their borders. However, the directive does not mandate that these records be made public.

Similarly, the Norwegian, UK, and Ukrainian governments have all approved legislation mandating firms to reveal information about their owners, albeit these have yet to put into effect.

Every penny that moves into the country should be tracked and it should also empower the media by enacting enabling legislation and providing reporters with greater access to information. Ensure that all investigations into financial crimes are made public in order to humiliate the perpetrators.

Reforms aimed at improving financial management and enhancing the work of auditing agencies have had a greater impact in many nations than public-sector reforms aimed at combating corruption.

One such reform is the transparency of budget information, which avoids resource waste and misallocation. Transparency International(TI) for example, encourages transparent and participatory budgeting by training local populations to comment on their local government’s proposed budgets.

Allows for adaptation and improvement for accountability objectives. Governments and non-governmental organizations (NGOs) should establish programs that ensure monitoring and evaluation systems are capable of measuring various aspects of transformative change that progresses at varying rates throughout the couthrives.

In addition, the drive for political power in Nigeria has had a significant impact on corruption. Such authority, related to resource management, has resulted in rule bending and the formation of a small but complicated elite network with access to and control over the nation’s wealth. This network spans the commercial, political, public, and private sectors. In the public sector, for example, emphasis is placed on tribe, religion, and other primal issues in employment allocation, producing a patronage structure that fosters corruption.

If the measures proposed are implemented, corruption will be reduced or even eliminated in Nigeria.