Which ethnic group in Nigeria is the most powerful, do you want to know? In Nigeria, there are more than 300 known tribes, all of which have unique customs, traditions, and languages. But which tribe in Nigeria is the most powerful? You’ll find the answer in this article. Igbos are skilled in commerce, but Yorubas are the nation’s most educated ethnic group. To be fair, each tribe in Nigeria is powerful, albeit in separate regions. In terms of population, area, military prowess, and political influence, the Hausa and Fulani tribes are the strongest. The Yoruba tribe is strong in terms of academics, whereas the Igbos boast about being the wealthiest tribe in terms of banking and business. The strongest tribes in Nigeria now are highlighted below. 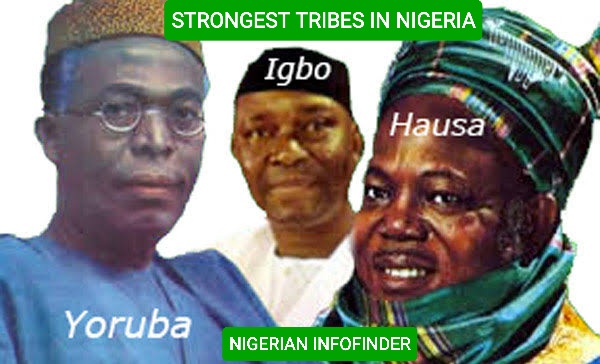 The nation’s top-performing ethnic groupings are listed below.

Which Nigerian tribe is the most powerful? Hausa The Hausa tribe are predominantly located in Nigeria’s northwest and the neighboring southern Niger. They are the most significant ethnic group in the region, which also has a sizable population of Fulani. Due to their adoption of Hausa language and culture, the majority of Fulani have established themselves among the Hausa as a governing class.

Kano was the most formidable city-state by the fourteenth century. The hub for the trans-Saharan trade in grain, cloth, leather, and salt had been established in Kano. The Bayajidda fable reflects Hausa oral history.

The language, culture, and ancestry were all shared by the Hausa states. The states were known for their ferocious rivalries, with each state striving for dominion over the others.

They hindered the strength of their combined state since they were always at war with one another and frequently collaborated with intruders to the disadvantage of their sister states.

The second-largest tribe in terms of numbers in the nation is the Fulanis. They are located in the nation’s Northern geopolitical region. These ethnic groupings contain a variety of civilizations. In contrast to Christianity and other major religions, Islam is the predominant religion of the Fulani people in the states where they live.

The Fulanis are regarded as one of Nigeria’s strongest tribes because the majority of them hold prominent positions in the government. In reality, this group has given Nigeria 90% of all its presidents ever since country’s independence in 1960.

In addition, they are numerous in the Nigerian military. In addition, they have the greatest mortality rate in the nation among all the major ethnic groups, making them the poorest tribe overall.

The ability of Igbo speakers to manage money wisely and operate enterprises is one of their greatest assets. This tribe inhabits five states in the southeast of Nigeria where the Igbo language is the most common one.

You hardly travel anywhere in the nation without running into an Igbo entrepreneur. They are regarded as the Nigerian tribe with the highest concentration of prominent businessmen and women. Despite their bragging about this accomplishment, Igbos are not without faults. The FBI has published a list of fraudsters who commit cybercrimes, scamming both large corporations and ordinary people. Unfortunately, a higher percentage of the list’s names belonged to the Igbo tribe.

In terms of politics and academia, the Yoruba tribe in Nigeria is also powerful. They take pride in having the most professors in the nation and graduates from several of the finest colleges in the globe. The Yoruba-speaking states are located in Nigeria’s south-western geopolitical region.

The political involvement of the Yorubas is another factor contributing to their reputation as one of Nigeria’s strongest tribes. Additionally, they have a respectable number of powerful, active politicians holding national leadership positions.

The Yoruba tribe’s youth have a high rate of unemployment, which is the only problem. This has caused an increase in rape, kidnapping, and other criminal activity in the Yoruba states.

The Kingdom of Benin, commonly referred to as the Edo Kingdom, was a sovereign state located in what is now the southwest of Nigeria. One of the first and most advanced states in the coastal hinterland of West Africa was the Benin Kingdom. It developed from the former Edo Kingdom in the eleventh century AD and flourished until the British Empire seized it in 1897.

Before the invention of firearms in the 15th century, the Benin people relied heavily on archery, the short sword, and conventional weapons like the spear. In order to produce light firearms, an area guild of blacksmiths attempted to be reorganized in the 18th century. The Benin army also had a specific force made up of crossbowmen.

The Ibibio-Efik are among the strongest ethnic groupings in the country. The Ibibio people live along southern Nigeria’s coast. The states of Akwa Ibom and Cross River contain the most of them. The Ibibio Union requested British recognition as an independent entity during Nigeria’s colonial era.

It is stated that an Ijaw born person can be found close by wherever there is a river. Even though it’s not always the case, such words are nevertheless quite important. The Niger Delta in Nigeria is home to a group of people known as the Ijaws. And because of their affection for the water, many of them work as migrant fisherman.

The Ijaw tribe is without a doubt the most populous one in the Niger Delta region, with a populace of about 14 million. They might rank as Nigeria’s fourth-largest ethnic group.

The Itsekiri tribe is exceptional in every way. They are well endowed with the things that their stature would suggest they lack. As a result, they are among Nigeria’s most loved ethnic groupings.

The Itsekiri might not be as numerous as the other major ethnic groups in the nation. They do, however, brag of having significant personnel and material resources. These characteristics, which go back to pre-modern times, have remained to attractively describe the Itsekiri version of history.

The Tiv belong to the Tivoid people. They number more than 5 million people and make up about 2.4% of Nigeria’s overall population. There are a few Tiv speakers in Cameroon and roughly 5 million Tiv speakers in Nigeria.

Numerous nations around the world, including the United States and the United Kingdom, are home to members of the Tiv group. These nations have unions where people can gather and talk about issues affecting their people all over the world.

The Nupe are an indigenous people that originated in the Middle Belt of Nigeria (traditionally referred to as Nupawa by the Hausa and Tapa by the neighboring Yoruba). They are a minority in Kwara State and the dominant ethnic group in Niger State.

The Tsoede, who abandoned the palace of Idah and founded a loose confederation of cities along the Niger in the 15th century, is credited with giving rise to the Nupe.

Nigeria is home to several ethnic groups, including the Igálá. Since Lokoja had previously served as the home of Nigeria’s capital, the Igala played a key part in the development of Nigeria.

Igala civilization in its traditional form was governed by a kingdom. Kings were deities and lived in a world full with restrictions. They hosted lavish courts that were attended by numerous servants and officials. Every heavenly kingdom in Africa had traditions that served as limits on the king’s authority.

In addition to the tribes mentioned above, there are a number of other minor ethnic groups that are significant to the country. As an illustration, consider Nigeria’s south-south region’s Ogoni, Ekoi, and other tribes. They originate from the oil-producing regions that, thanks to the crude oil they generate, are responsible for most of Nigeria’s wealth.