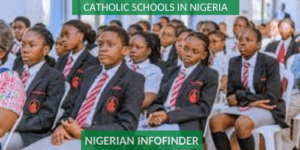 The school curriculum is designed in such a way that students can sit for and thrive in WAEC, NECO, JAMB, SAT, and IGCSE tests.

The list below, in no particular order, contains the best catholic secondary schools in Nigeria.

Ikoyi is home to St. Gregory’s College. It is a boys-only day and boarding school that was founded in 1928. It was founded entirely by the Catholic Mission and has evolved into a one-of-a-kind institution sought after by discerning minds seeking to share in its calibre of education. The school’s goal is to provide each child with a strong spiritual foundation, to help them achieve their potential, to help them be competitive and daring, to foster independent thinking, and to provide chances for them to reflect on life and learning.

Students are educated using both Nigerian and international curriculum, preparing them for exams such as the Cambridge IGCSE. It features resources such as a chapel, border hostels, a library, a clinic, science laboratories, arts and music rooms, ICT center, well-ventilated classrooms, a sports field, and others.

St. Finbarr’s College is an all-boys day and boarding school in Akoka. It is held by the Archdiocese of Lagos and was founded by the late Rev. Fr. Dennis Slattery, an Irish Missionary Priest whose purpose was to educate children in fundamental and vocational skills.

St. Finbarr’s College is among the greatest Catholic secondary schools in Lagos in my opinion. For example, the school has received numerous sports accolades. Between 1962 and 1980, they won the Principals Cup twelve times. They won a few times in the Ultimate Chess competition. They have also won a couple of times in the Junior Quiz Catholic Schools in Lagos competition. The school was the first secondary school in Lagos state to represent the African Union in Nigerian Secondary School Sport.

The school features excellent facilities, including well-equipped science laboratories, a chapel, an ICT lab, a clinic, clean hostels, a tennis court, an arts studio, a music room, and a library, among others. Students are encouraged to join at least one club, such as the Chess Club, Literary and Debating Club, Red Cross Society, Boys Scout/Brigade, Legion of Mary club, Jets club, Drama club, and others.

The Lagoon School is the inaugural project of the Nigerian Association for Women’s Advancement (NAWA), a non-profit educational and social organisation committed to investing in girls. The Lagoon School was founded on September 15, 1995, and was open only to girls at the time, with 50 students. The Lagoon Secondary School currently has 632 pupils. In April 2001, the school relocated from its previous home at 75 Adisa Bashua Street in Surulere, Lagos, to Lekki.

Lagoon School continues to exist in response to the high demand in today’s world for a school that preserves virtues and moral standards. The school establishes a channel for teachers to collaborate with parents in raising their children. The Lagoon School continues to be a day school for girls, giving solely academic, social, physical, moral, spiritual, and cultural education. This school’s students are noted for their high academic performance, good behaviour, and strong Christian convictions. Lagoon School can be found on Ladipo Omotesho Cole Street, off Adewunmi Adebimpe Drive in Lekki, Nigeria.

The story of Maryland Comprehensive Secondary School is claimed to begin with the prayers of Rev Mother Arcade, OLA, who pleaded for the Catholic Mission to be given the land on which the school is currently located in order to establish a school. Maryland Comprehensive Secondary School has built a name for itself in today’s rapidly expanding Lagos Metropolis. The school’s mission is to provide a lasting legacy of high-quality, low-cost education in a welcoming learning environment. In addition to their studies, students participate in secular activities such as sports, cultural events, and religious activities. To this day, the school can brag of being more than just a convenient neighbourhood school, but also a sought-after and esteemed destination school. Maryland Comprehensive Secondary School is situated at Catholic Mission Compound, Maryland Ikeja, Lagos state.

Loyola Jesuit College, like many other institutions around the world, is run by the Society of Jesus. It is a coed boarding secondary school (otherwise known as a mixed school). The school’s JSS 1 class debuted in 1996, and it now has 600 pupils ranging from junior secondary to secondary school. Only pupils over the age of ten are encouraged to apply for admission to the school. Not only does the school provide a favourable learning environment for academic objectives, but also for social activities such as sports and athletics. Loyola Jesuit College is a successful educational learning environment with teaching and supervision provided by members of the Society of Jesus as well as other lay professors and personnel. Gidan Mangoro, Karu-Karshi Road, Abuja, Nigeria is the address of the school.

Our Lady of Apostles is a Yaba-based all-girls day and boarding school. It was founded in the second half of the twentieth century, specifically in 1956. The Catholic Mission recognised the need to establish a girls’ secondary school on Lagos State’s Mainland.

In 2013, the school received the second-best NECO performance and was awarded the Best School Environment in the Mainland. The pupils are well-known throughout the state for their athletic abilities, having won numerous events throughout the years.

Holy Child College strives to educate the whole child academically, mentally, and spiritually. The school offers a well-stocked library, a resource centre (a multimedia computer facility), a cutting-edge computer lab, and a comfortable dormitory. Inter-house sports, cultural events, and getaways are all available to students. The founders’ belief that girls should be educated to “fit the wants of the age” is still embraced today. Holy Child College is situated at No. 2 Ojo, off Toyan Street in Southwest Ikoyi, Lagos.

Apapa is home to Sacred Hearts College. It is a mixed residential school that was established in 2007. Their vision statement is “to produce mature young men and women who will lead our country.” ‘To develop graduates who have gained the competencies required for self-reliance in today’s society.’

The school adheres to the Nigerian curriculum and hires competent teachers and caretakers to educate and care for the pupils in any manner possible, supporting the ‘never give up’ slogan.

The school offers big air-conditioned classrooms with smart boards, an ICT centre, science laboratories, a music room, an arts studio, a library, a sports field, a clinic, comfortable hostels, and a well-organized security system. Every student is required to participate in extracurricular activities as well as join at least one of the school groups, such as the Academics club, Press club, Math club, Debate club, Homemakers Club, Young Farmers club, Business club, and many others.

Mater Ecclesiae College is located in the Epe neighbourhood of Lagos state. It is a 2015-founded mixed boarding school. It was founded by the Church of the Assumption in Falomo to help the educational sector in Lagos state. Their mission is to “develop men and women of real character and profound integrity, endowed with sincere respect for the dignity of the human individual regardless of creed, colour, or class; a love of learning, and a dedication to innovative leadership.”

Teachers at the school are capable of identifying and nurturing particular abilities in all kids. The Nigerian curriculum is taught at the Junior Secondary School level to instil in children the Nigerian culture, values, and beliefs. They take the NECO and Lagos BECE in their third year. A thorough and coordinated scheme of study is provided at the Senior Secondary School level, preparing students for both national and international examinations.

Catering is one of the school’s mandatory subjects, and every student is required to take it.