Before the year 1500, Nigeria’s modern settlement was separated into kingdoms rather than states, as it is today. These ancient kingdoms defined themselves by the names of ethnic groups. The Nupe Kingdom, Kanem-Borno Empire, Igala Kingdom, Igbo Kingdom of Nri, Oyo Empire, Kingdom of Ife, Benin Kingdom, and the Sokoto caliphate were among these early empires. Later in the nineteenth century, Christian missionaries brought the Portuguese and English to West Africa. The missionaries claim to have taught the indigenous peoples how to read and write. 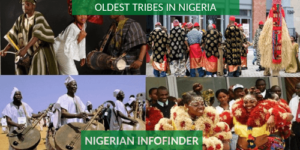 Nigeria is a multi-ethnic African country with numerous tribes and languages. Although the primary tribes of Nigeria are the Igbos, Yorubas, and Hausas, there are numerous minorities spread around the federation who are also citizens of the country. There were ancient tribes that existed prior to the founding or the unification of Nigeria in 1914, each with their own culture, a system of administration, and religious practice.

Nigeria is a diverse country with about 197 million people who are members of one of 300 ethnic groups. Because they are direct descendants of some of the first modern human populations, many indigenous groups have different DNA markers. These tribes are distinguished by their genetic and linguistic traits. Moreover, despite English colonisation, many tribes have maintained their cultural traditions for thousands of years.

In this piece, we will look at ten of Nigeria’s oldest tribes and provide information about them. Please keep in mind that no one can pinpoint the precise tribe that claims to be the oldest, but we have data that prove that the ten tribes listed below are the oldest in the country today. The following are the ten oldest tribes in Nigeria. This ranking isn’t determined by any arbitrary criterion. Furthermore, we are simply arranging these tribes in an unofficial order based on historical facts and data.

Which of these tribes was the first to appear? Here’s a quick review of some of Nigeria’s oldest indigenous groups, in no particular order:

There are largely Hausa-speaking communities throughout West Africa. The Hausa have traditionally resided in tiny villages, pre-colonial towns, and cities. They communicate in Hausa, an Afro-Asian language spoken by the Chadic people.

The Hausa elite has historically maintained an equestrian culture. The Hausa Nok culture emerged around 1000 BCE in northern Nigeria and died out in the West African region around 300 AD for unknown reasons. It is thought to be descended from an ancestral nation that divided to form the Hausa. Nok’s social system is said to have been sophisticated. The Nok culture is thought to have been the first in Sub-Saharan Africa to create life-sized Terracotta figures.

The Edo, also known as The Benin, are one of Nigeria’s oldest tribes. They are Edo descendants who speak in Edo. The name “Benin” (and “Bini”) is a Portuguese corruption of the word “Ubini,” which was first used around 1440 during the reign of Oba (ruler) Ewuare the Great.

Edo people are found in Nigeria’s Edo State, which gets its name from Benin City, the region’s most important historical conglomeration. Many related groups exist in Edo’s immediate surroundings, which are also constrained by political and administrative boundaries. The majority of these organisations may be traced back to mediaeval Benin City.

The Yoruba are also among Nigeria’s oldest tribes. Over 35 million Yoruba people live in Africa. This ethnic group is predominantly found in Nigeria, where they make up about 15.5 per cent of the population.

The Yoruba people are one of Africa’s most urbanised groups. For centuries, the bulk of Yorubas has resided in well-organized urban areas based on powerful city-states and the residence of the Oba. In ancient times, the majority of these villages were fortresses with massive walls and gates.

Yoruba cities have always been among the most populous in Africa. For a long time, Ibadan, one of the major Yoruba cities founded in the 1800s, was also the largest metropolis in Sub-Saharan Africa. Today, Lagos, another prominent Yoruba metropolis, is Africa’s largest city.

The Igbo are also among Nigeria’s oldest tribes. They are a meta-ethnic group from what is now southern and southeastern Nigeria. One of Africa’s most prevalent ethnic groupings is the Igbo. The Igbo language is part of the Niger-Congo linguistic family.

The Igbo people’s origins have been the topic of much speculation, as it is unclear how the community came to be. Before British colonial power in the twentieth century, the Igbo were a politically divided nation. Following decolonization, the Igbo developed a strong sense of ethnic identity. During the Nigerian Civil War (1967–1970), the Igbo territories seceded as the short-lived Republic of Biafra.

The Nupe tribe is one of the country’s oldest tribes, and it is thought that most dialects and languages that exist in the middle best are due to the Nupe people. They are located in Niger State, Kwara, Kogi, and the FCT, respectively. The old Nupe Kingdom arose in the mid-15th century in a basin between the Niger and Kaduna rivers.

The majority of the history learnt about this ancient country was based on oral traditions. Around 1770, Ruler Jibiri is supposed to have been the first Nupe king to accept Islam. Ma’azu ruled the Nupe kingdom during its golden age in the 1800s. Following Ma’azu’s death, the Fulani conquest of Northern Nigeria through further conflicts led to the Nupe Kingdom’s subjugation and incorporation into the Gwandu Emirate.

Currently, the Nupe people speak over five dialects: Bassa-Nge, Kupa, Kakanda, Dibo/Abawa, and Gana-Gana. The Nupe tribe is one of Nigeria’s oldest. The Nupe ethnic group is vital to Nigerian art and culture, and most Middle Belt dialects can be traced back to them.

The Igala are another old ethnic group in Nigeria worth mentioning because the Igala kingdom originated in the 16th century, making them one of the country’s oldest tribes. The old Igala Kingdom was formed in the 16th century by Abutu-Eje and was administered by nine high officers known as the “Igala Mela.” These guys were regarded as the keepers of the sacred Earth shrine.

Ebule-Jonu was the first Ata (the monarch of the Igala kingdom). Her brother Agana-Poje, the father of Idoko’s successor, succeeded her. Ayegba led the popular fight against Jukun, and he was Idoko’s second son, succeeding his father as Ata’Gala. The Igala people, who live in the territory formed by the Benue and Niger rivers, are noted for their bravery. They can also be found in the state of Kogi.

The Kanuri are an old tribe in Nigeria. They are grouped into subgroups and have different names in different places.

The Kanuri language was and still is the primary language of the Bornu Empire. The majority of Kanuri people dwell in northeast Nigeria. Kanuri is spoken by around 3 million people in the country.

The ceremonial Emirate of Bornu can be traced back to the Kanem-Bornu Empire, which was established approximately 1000 CE. According to Kanuri tradition, in the ninth century, Sef, the son of Yemen’s Dhu Ifazan, arrived in Kanem and established the Sayfawa dynasty. Evidence of indigenous state development dates back to roughly 800 BCE at Zilum in the Lake Chad region.

The Ibibio people live on the southern Nigerian coast. They are mostly found in Akwa Ibom and Cross River states. They are related to the Annang and Efik peoples. Efik-Ibibio is a significant dialect cluster in the Cross River branch of Benue–Congo.

The Ibibio people are the oldest of all Nigerian ethnic groups, living in the palm belt of southeast Nigeria. The Ibibio are said to have been the first people to settle in southern Nigeria. They are believed to have arrived at their current site around 7000 B.C. Regardless of historical evidence, it is unknown when the Ibibio first came into the state.

The Ebira are an ethnolinguistic group from central Nigeria. Many Ebira people are from Kogi, Kwara, Nasarawa, and Edo states. During the takeover of the Hausa nation by the army of religious and political leader Uthman Dan Fodio, this ancient Nigerian clan clashed with Fulani warlords to the north and west. Igu (Koton Large) and Igu (Koton Small) were established in the mid-nineteenth century. Between 1865 and 1880, they fought alongside jihadists from Bida and Ilorin. In contrast, the Fulanis did not conquer the Ebiras. Their steep terrain’s inherent safeguards benefited them in part.

The Ijaw are a Nigerian ethnic group centred in the Niger Delta. There are significant population clusters in the states of Bayelsa, Delta, and Rivers. They are also present in other Nigerian states including Ondo, Akwa Ibom, and Edo, where they are long-term migrants. The Ijaws number slightly more than 10 million people, accounting for 1.8 percent of Nigeria’s population.

The Ijaws have been present in Nigeria’s Niger Delta region since 500 BCE, making them the country’s and one of the world’s oldest tribes.