Instagram has grown to be one of Nigeria’s most popular apps, and we must commend these Instagram comedians for regularly creating amusing material that keeps users engaged on the network. 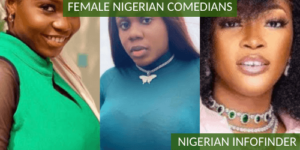 With all of the pressures that society and the country put on us, having someone break our ribs with laughter is a wonderful relief. We have stunning, well-dressed Nigerian Female Comedians on Instagram who will make you laugh all day, not only guys. In Nigeria’s comedy industry, the ratio of male comedians to female comedians is unbalanced toward the male. As a result, seeing select female influencers killing it on social media and bringing us chuckles is inspiring. These women are not only hilarious but also highly intelligent.

If you are African, you must be familiar with the disciplinary measures of African parents, particularly African moms. If you’re familiar with popular comedy skits, you’ve probably heard of Taaooma, an imaginative entertainer who has created amusing sketches on how African women punish their children.

Taooma’s full name is Apaokagi Adedoyin Maryam, and although being Nigerian, she received most of her education in Namibia after her parents relocated. Taaooma returned to Kwara State University, Ilorin, Nigeria, where she earned her Bachelor’s degree in Tourism and Hospitality, despite her thriving career in Arts and entertainment.

Nita Asuoha is better known as her stage name. The original Warri Pikin was born in Nigeria’s Delta State city of Warri. She is the third and oldest of six children. She earned a degree in Political Science/Public Administration from Benson Idahosa University Benin City skits in 2012.

In 2013, she married Mr Victor Ikechukwu Asuoha. “Why don’t I start making videos to motivate and entertain people?” she thought to herself.

In addition to being a wonderful comedian, Real Warri Pikin is an OPA and a film actress. She struggled at first with the demands of professional acting, but with time and determination, she was able to swiftly master the ropes.

Ayo Makun co-produced her involvement in the film Merry Men 2 as a supporting actor (AY). Real Warri Pikin hosts the MAX Drive Show on MAX 90.9 FM Abuja on Wednesdays from 6 p.m. to 10 p.m.

Real Warri Pikin, one of Nigeria’s best-known comedians, has put in a lot of hard work and creativity, and she’s also wonderfully attractive and trendy!

In 2015, Emmanuella received the G Influence Niger Delta Special Talent Award. She also received the City People Award and the NEA Award. She is the most well-known child celebrity in Nigeria.

Omo Ibadan Adeyela Adebola, better known by her stage name Lizzy Jay “Omo Ibadan,” was born on September 17, and is a popular Nigerian Female Comedian on Instagram. She is currently one of Nigeria’s top comediennes, and her comic routines are always trending on social media.

Lizzy was born in her birthplace of Ile-Ife, Osun State. She attended the Education of Science in Ile-Ife for primary and secondary school. Her diploma in Microbiology was also conferred by the Federal Polytechnic Ede.

Omo Ibadan, as she is fondly called, is one of the few female comedians to have achieved success. Lizzy began her stand-up comedy career in 2017. She became an internet sensation after her smart comedic routines were released online.

Wofai Egu Ewa, often known as Wofai Fada, is a Nigerian businesswoman, TV personality, and comedienne. She has over 1.1 million followers on Instagram and has built a name for herself in the entertainment industry with her humorous skits.

Her friends urged her to videotape some of her jokes because she had a hilarious demeanour, which resulted in her publishing online sketches in 2014 as a casual hobby that grew into a job. Wofai Fada has collaborated with prominent comedians such as Craze Clown, AphricanApe 06, EmmaOhMaGod, and others. Her debut hosting assignment was at the 2015 MTN Lovers Ball.

The woman who has acquired a following for her humorous comments and has gone viral several times for her incomparable baby voice and character is the one to beat in the Nigerian comedy industry.

Helen Paul was raised by her mother when her grandma died at the age of 73 in Lagos. After graduating from high school, she pursued undergraduate, master’s, and PhD degrees in theatre arts at the University of Lagos.

She then found work as a backup singer and voiceover artist. She is a well-known entertainer and entrepreneur, as well as a role model and inspiration to young women. Helen’s face was a model of cleanliness for all of us who had the pleasure of seeing it.

Amarachi Amusi, often known as Ashmusy, is a Nigerian businesswoman, skits and content creator, and internet star who was born on July 25, 1995. She had her primary education at Good Learning School in Gbagada, Lagos State, and her secondary education at Federal Government College in Enugu State.

She then attended Madonna University, Elele, where she graduated in 2016. Amarachi began creating comedic sketches after discovering Instagram Videos, which she published on the social media network.

The skits received positive feedback, propelling her to relative popularity as a content creator on Instagram, where she also delivers material for brands in Nigeria.

Chioma may also morph into eleven distinct characters, the most popular of which is Chigul. Chioma Omeruah was born on May 14, 1976, in Yaba, Lagos, Nigeria, as the second child and first daughter of four children to Late Air Commodore Samson Omeruah and his wife Mrs Omeruah.

Her father was a public figure and a strict disciplinarian. Chigul was always good at singing and acting, but never at comedy. Comedy just happened to her; it was never planned. She creates amusing voice messages and sends them to her friends. Her buddies would listen, laugh, and then discard the voice message.

Then she performed a voice note that went viral on social media. That voice note signalled the start of her road to celebrity and glory. Chigul recognised her voice before her face.

People could only identify with her voice. Nobody knew who was hiding behind Chigul. Her first outing was at Basketmouth’s comedy concert, where she was invited to perform live on stage.

Chigul got her start, like most female comedians nowadays, on the internet. Posting small clips here and there caused her to go viral, and Chigul didn’t let her star fade away. She took advantage of every chance, dabbling in stand-up comedy, acting, and even music.