Nigeria has recently received a lot of attention due to the high bride-price in some states. This has sparked much debate on social media, with some Nigerian women claiming that men are unwilling to marry them because of the exorbitant bride price and items demanded by the bride’s family. 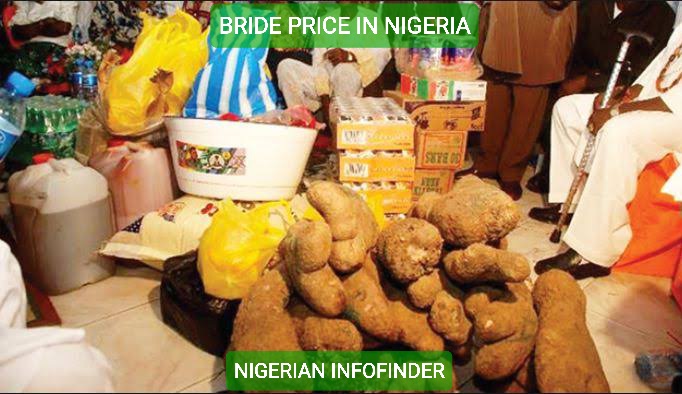 However, in Nigeria, a marriage is not considered complete until a certain amount of money and some symbolic items have been collected from the groom as a form of payment to his in-laws for caring for his bride since childhood.

A man who does not perform these rites is considered a thief, and a woman whose  bride-price isn’t paid before moving into a man’s house is considered cheap. Some cultures believe that such a woman will gradually lose respect from her husband and his family.

When a woman’s bride-price is paid, it represents the transfer of rights from the bride’s family to the groom’s family. It is not intended to be payment for the bride, but rather a material pledge and compensation for removing her from her biological family.

When marital problems arise and divorce is the only option, the bride-price and other items collected are frequently returned to symbolize the dissolution of the marriage.

However, some families and even communities are taking advantage of the tradition of paying bride-price before a woman can move into her husband’s home. Some charge based on the bride’s level of education, so a woman who went to school abroad and most likely has a postgraduate degree will be paid far more than an illiterate or a secondary school certificate holder graduate. Some cultures even require the groom to feed the entire community for three days.

A particular community even demands payment for the ‘bride’s mouth.’ Some ethnic groups base the bride-price on the groom’s financial prowess; for example, the Bororo demand between 10 and 50 live cows as bride-price.

Although bride-price is important in validating marriage in Nigeria, it should not be used to exploit the bride’s family or meet personal needs.

A recent brides list that sparked controversy demanded that the groom pay N3 million as bride-price, a car for the bride’s father, clothes and bags for the bride’s mother, new phones for her sibling, and other ridiculous items. People believe that marrying from the southern part of Nigeria is expensive, and that this is one of the reasons why some women from here marry late because it is difficult to find a groom willing to pay these exorbitant prices.

Some of them even go so far as to pay their own bridesmaids’ fees in order to get married. There have been reports of brides committing suicide because their suitors couldn’t afford the bride price. As a result of their inability to pay the exorbitant bride price, some men abuse their wives. They interpret the process as if they were ‘buying’ the woman and thus treat her as if she were an item or a slave.

Although this is not always the case, in some cases, paying exorbitant prices has resulted in psychological and sometimes physical abuse on the woman. Although paying bride-price is seen as a way of validating a marriage and demonstrating that the bride’s family consented to the union, it should not be used as a means of exploitation or meeting the needs of the family.

10 TRIBES WITH THE CHEAPEST BRIDE PRICE IN NIGERIA

These tribes, as well as a few others not mentioned, are thought to be exploitative in their demands. Certain ethnic groups, on the other hand, do not expect much from the groom’s family; in fact, some even return the bride-price and sponsor the wedding. Among these tribes are:

Weddings are viewed as a collaborative effort by both families in southwestern Nigeria. The bride price in this area ranges between N5,000 and N10,000. When this is paid, the bride’s father returns it to the groom to help support the new family.

This tribe is regarded as one of the least expensive in Nigeria to marry into. Although other necessary items are collected, their bride-price is approximately N20,000.

Because of this tribe’s religious orientation, the ‘Sadaki,’ or bride-price, is as low as possible because they believe a lower amount of bride-price commands more blessings in the union.

When a bride comes from this tribe, they are also thought to be lenient in their demands.

Delta state: Some parts of Delta state have bride prices as low as N12,000 per couple.

In this tribe, a law is passed that states that all wedding expenses, including the bride’s price and other expenses, must not exceed N100,000. This is cheaper when compared to southern parts whose costs run as high as N1 million.

The Urhobo tribe is also one of the tribes in Nigeria with the lowest bride price; they are found in Delta state and charge a very low bride price, ranging between N12,000 and N15,000

When marrying from these areas, the bride-price is N24,000 only, and other areas.

Bride-price is optional here unless the groom’s parents demand it.

The bride-price in Onitsha is one of the lowest in Nigeria’s southern region. The sum of N40,000 is all that is requested.

It is not expensive to marry from this tribe. As bride price, a groom is only required to pay N120,000.

NIGERIAN TRIBES WITH THE MOST EXPENSIVE BRIDE PRICE

In Nigeria, some tribes’ bride prices are considered to be on the high side. These tribes include:

In some cases, the bride’s price and the cost of the necessary items may exceed N1 million naira.

Their demands can reach N700,000 or more. They believe that because they have raised their daughters to be resilient and strong, the man is getting a good deal by marrying from there.

A woman is seen as an asset to a man in this country, so she must be purchased. Bride prices start at N100,000 and can go higher depending on the bride’s level of education.

Bride-price is demanded in Euros and is also estimated based on the groom’s financial situation.

Marrying in this region is considered an expensive affair, as the bride-price and other items required can cost up to N1 million.

With the tribes we’ve listed and discussed here, it’s clear that the bride price is not a regional phenomenon that should be generalized. Some tribes charge a lot, while others in the same region charge less.