The Nigerian judicial system is one of the federal government’s three arms or branches. This branch of government applies the country’s laws to individual circumstances and resolves all issues that come before it via the courts. Nigeria has a number of different sorts of courts, totaling eight. 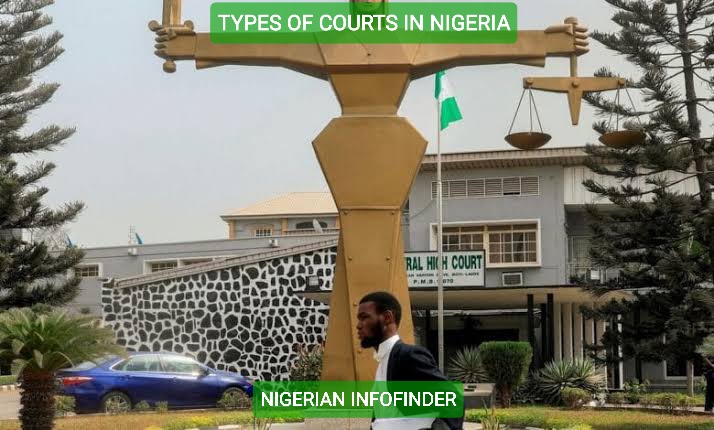 These courts are arranged in heirarchical order, meaning they are ranked by decreasing order. All of these courts have different tasks or roles that are clearly defined in the Federal Republic of Nigeria’s constitution. The hierarchy of Nigerian courts is described in this article, along with their varied jurisdictions and purposes.

TYPES OF COURTS IN NIGERIA AND THEIR FUNCTIONS

The many sorts of courts in the country are listed here, along with their responsibilities.

All subordinate federal courts and the highest state courts in the country are subject to the top court’s appeal jurisdiction. Furthermore, the Supreme Court of Nigeria’s decisions are binding on other Nigerian courts, with the exception of the Federal High Court.

The country’s top court is made up of the Chief Justice of Nigeria and 21 other Supreme Court justices. They are selected by the President on the National Judicial Council’s proposal and must be confirmed by the Senate. They must retire when they reach the mandatory retirement age of 70.

The Court of Appeal follows the Supreme Court of Nigeria in the Nigerian judicial hierarchy. Nigeria now has seventy-two (72) courts of appeal located across the country’s six geographic zones.

The country’s appeals court is chaired by a president, and rather than trying issues, it evaluates how matters were tried by trial courts to ensure that the case was correctly tried. Its operations center are in Abuja’s Three Arms Zone.

The Federal High Court is the Nigerian judiciary’s third appellate court, behind the Court of Appeal and the Supreme Court.

The court is headed over by a Chief Judge, with a number of Judges working under the National Assembly’s directions. It can be found in over fifteen (15) states across the United States.

At minimum one Judge of Court is required for the Federal High Court to operate normally. It has constitutional authority over civil issues and matters pertaining to the Federal Government of Nigeria’s revenue, including taxation, customs, excise charges, banking, admiralty, and citizenship, to name just some.

State high courts are similar to federal high courts. They were constituted under the amended Section 255 of the 1999 Constitution. The statute allows for the establishment of a High Court in every one of the federation’s states as well as the Federal Capital Territory.

A chief judge serves as the head of each state’s top court. The composition of judges on the State High Courts is determined by the State Houses of Assembly and, in the case of the High Court of the FCT, the National Assembly. Under the 1999 Constitution, they have jurisdiction over civil and criminal disputes, and they can take legal action from Customary Courts, Area Courts, Magistrate Courts, and other courts.

The NIC possesses all of the powers and appellate jurisdiction of a state’s high court. Its main headquarter are in Area 3, Garki, Abuja, at 11, New Bussa Close. There are also a handful of National Industrial Courts located throughout the country.

The Sharia Court of Appeal is a Nigerian central government appellate court. It is a federal court that is a component of the consolidated courts system that operates in the northern half of the country, particularly in the north-east, in which Sharia is practiced.

The conventional and regular laws of other Nigerian areas are not interpreted by this court. Since its appellate jurisdiction is primarily limited to reviewing and interpreting civil issues concerning Islamic law, this is the situation. The Sharia Court of Appeal is led by a Grand Kadi, with a handful of Kadis ensuring the court’s proper functioning.

A Customary Court of Appeal is led by a president and other judges appointed by the National Assembly and the State Houses of Assembly to operate alongside him.

In civil disputes relating to matters of customary law, the court operates and has monitoring and appellate jurisdiction.

Magistrate courts, also referred to as District courts in some states, is a lower division court under the State Authority.

The Federal Republic of Nigeria’s 1999 Constitution does not allow for Magistrate and/or District Courts; instead, the State Houses of Assembly create them by legislative orders. Brief decisions are rendered by these courts even without participation of the concerned parties.

The only distinction between Magistrate and District Courts is their names. These courts deal with civil law, and then each region has its own system of regulations.

That’s the view of the types of Courts that are in the Nigerian judicial system. These courts performs their respective functions which distinguishes themselves. We tried to cover all these information as we highlighted these courts in hierarchy in a decreasing order. We believe you learnt something from this list of courts in the country and their respective functions. That’s the length of this write-up.