The Yoruba tribe has the most well-known musicians who have achieved success in Nigeria’s music scene. Do you want to find out more about them? Given that Yoruba is home to some of the most talented musicians in the nation, compiling this list is a tremendous undertaking. On the other hand, the nation has a variety of musical styles. It becomes difficult to agree on the best music because each of these genres has a distinct following. Our criteria, however, are based on each artist’s quantity of albums and hit singles, number of accolades received, success rate, and level of popularity. 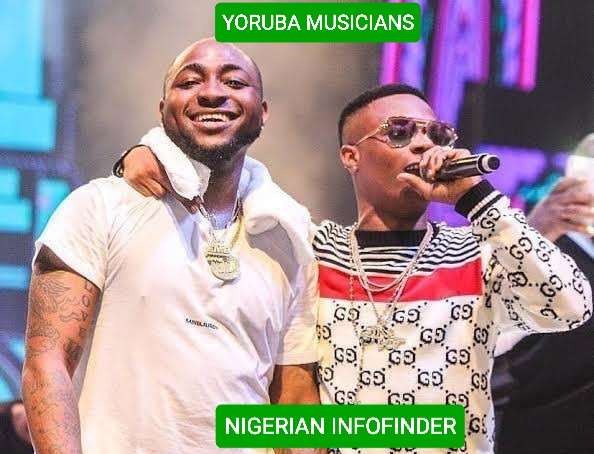 Here are Nigeria’s top musicians from the Yoruba speaking tribe:

Ayodeji Ibrahim Balogun, better known by his stage name Wizkid, is regarded as one of Nigeria’s greatest musicians. He may face challenges to his status as the best, but he still commands the highest rank in the Yoruba tribe. However, it’s important to keep in mind that the criteria take into account both national and worldwide recognition. The musician’s most notable contribution to the music industry has been his adoption of Fela Kuti’s musical aesthetic.

Wizkid is the Nigerian celebrity with the most honors with roughly 65 wins under his belt. He entered the spotlight after the release of his debut album, Superstar. His third and fourth studio albums, along with other foreign billboard charts, peaked at Number 2 on the US World Albums Billboard Chart.

Additionally, Wizkid gained fame around the world for the song One Dance, on which he collaborated with Drake. He received a BET and Grammy Award for his work on the song Brown Skin Girl with Beyonce. We are grateful for his important contribution to the Nigerian music scene.

Among the best musicians from the Yoruba tribe is David Adedeji Adeleke, better known as Davido. He began his musical career in 2010, and in 2012, he became well-known. Davido has put out three studio albums and one extended play over the duration of his musical career. Davido’s partnerships with well-known Nigerian and foreign musicians helped him become well-known.

Davido’s music is a fusion of traditional African themes and international contemporary pop. He progressed from early club-friendly music to charting tracks and album features from well-known artists like Chris Brown and Nicki Minaj. Davido, who has won a total of 29 awards, is regarded as one of Nigeria’s top musicians. He became the first performer from an African background to win an award on the BET Awards main stage in 2018.

Tiwa Savage is unarguably the richest and most well-known Yoruba female musician. With Tiwa Savage working in the entertainment sector, it is evident that success, notoriety, and riches do not depend on a person’s gender. The well-known vocalist has won 20 accolades and released five studio albums so far. Over the course of the narrative, Tiwa has gained considerable notoriety and continues to be one of the Nigerian music superstars who has had a significant impact on the local and national music industries.

As a stage performer, Tiwa Savage launched her music career in the UK in 1996. She clearly took over the sector in 2012 when she returned to Nigeria, and she has since kept that position as the best and top female musician.

The well-known indigenous rapper Olamide comes next on our list of the top 10 Yoruba musicians. Olamide is without a doubt one of the top musicians currently making waves in the nation. The musician has 22 accolades, 8 studio albums, 3 Eps, and collaborations to his name. His debut album Rapsodi’s hit Omo To Shan helped him become well-known in the Nigerian music industry. The composer has not taken any steps backward in his musical progression.

The YBNL Nation boss is known for being the driving force behind Nigerian rap and hip hop. He has received various honors for his noteworthy contributions, including three City People Entertainment Awards and many more.

Folarin Falana, known professionally by the moniker Falz the Bahd Guy, is a well-known singer from the Yoruba tribe. He has released four studio albums. Due to their original rap phrases, Falz’s songs have done nothing but touch listeners’ emotions. One of the best and most popular musicians in Nigeria’s entertainment sector is the rapper. Nigeria Music Video Awards, Africa Magic Viewers Choice Awards, BET Awards, The Headies, and City People Entertainment Awards are among the 12 honors he has received.

Another Yoruba woman singer who has achieved great success in her career is Simisola Bolatito Kosoko, better known by her stage name Simi. She started out as a gospel performer in 2008, but in 2014, the release of her hit song Tiff, catapulted her to popularity. She gained a sizable fan base as well as several accolades thanks to the song. Simi’s sonorous and alluring voice has won the hearts of her listeners, staying in their brains long after the song has ended.

One of the top musicians now ruling the nation is Simi. Her songs have original, well-written lyrics that can withstand time.

Yet another well-known Yoruba artist who has elevated the field is Daniel Oyebanjo, better known by his stage name D’banj. He is one of the musicians who changed Nigerian music and improved its receptivity to up-and-coming talents. Tongolo, Oliver Twist, and other songs helped him get into the business and become well-known. D’banj, a multiple national and international award winner, requires no introduction to the Nigerian entertainment industry.

D’banj has released four studio albums and a number of popular songs. He is also praised for having received 29 honors throughout his musical career. In terms of the music landscape and his contributions to the business, D’banj has stayed relevant.

Daniel Anidugbe, better known by his stage name Kizz Daniel, is an accomplished singer who has produced a number of top hits throughout the years.

The Afro Pop singer has established himself as one of Nigeria’s leading performers. Even though he has only been in the music industry for five years, he already has a number of number-one hits to his credit.

Kiss Although Daniel has always liked singing, he didn’t start taking music seriously until he finished his university studies.

Olubankole Wellington is frequently referred to as Banky W on stage. He was born in the United States in 1981. However, while he was only 5 years old, his parents moved down to Nigeria, so he didn’t remain there for very long. He went back to the state to finish his studies since he loves learning.

Since he first began making music in roughly 2002, Banky W has created about 5 strong albums that have all rocked the entertainment industry.

Adekunle Gold comes in last on this list of the top ten Yoruba musicians. This is a highlife singer, composer, and graphic designer from Nigeria who has won awards. Gold was born Omoba Adekunle Kosoko into the Lagos State royal dynasty, where he currently holds the title of prince. He is the internationally renowned “Nollywood” actor Prince Jide Kosoko’s nephew. In 2015, Adekunle Gold ranked third among Nigerians who were most frequently searched for on Google. At the 2015 AFRIMA, he took home the prize for “Revelation of the Year.”