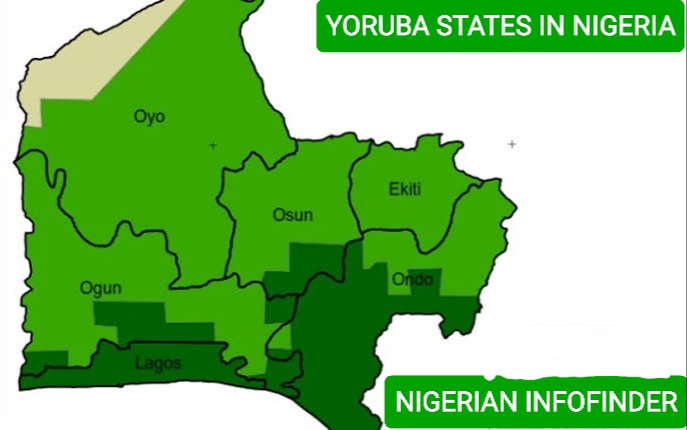 The Yoruba people have been around since the 7th century. Not much was known about the Yoruba speaking people until the 8th century. Ile-Ife is currently considered to be among the oldest kingdom in Africa.

The area of where the Yoruba tribes or people can be found are located in Nigeria, Togo, and Benin Republic. However, the greatest number of Yorubas can be found in Nigeria in terms of population. In Nigeria, the South-western geopolitical zone is home to the Yoruba people.

The following are the Yoruba states in the south-western geopolitical zone:

Not all inhabitants of Kwara State are Yoruba, however the state does include part of Yorubaland. Furthermore, there are a number of individuals who speak Yoruba in Kogi and Edo who are well-known throughout the country.

The following are the Yoruba-speaking states found in Nigeria.

Oyo is a Yoruba-speaking state with a long and illustrious history. The slogan of the state is “Pace Setter State.” The University of Ibadan was the first Premier University in Oyo state, founded in 1956. Aside this, Oyo state is also home to the Nigeria’s first skyscraper, which was constructed as a residential complex for cocoa planters. This state also has the Ado Awaye Suspended Lake, Old Oyo National Park, and numerous tourist destinations. Agriculture is Oyo state primary industry. There are 33 local government areas currently in the state.

Ogun State, whose slogan is known as the Gateway state, is the most industrialized in Nigeria. There are so many businesses in this state within the Lagos-Sagamu Expressway’s 2km government acquisition area. It is also home to many religious institutions and universities, in addition to being an industrial zone. Ogun state has borders with Lagos and Edo states, and it is made up of 20 local government areas. The Ogun State capital is Abeokuta.

Another rich Yoruba state is Lagos, this state is recognized as the economic center of excellence, and it shines in terms of economic performance. It is the country’s most economically significant state and one of the richest states in Nigeria. Lagos is the country’s second-largest industrial state, after Ogun State. Lagos is the business center of Nigeria, and it is regarded as Nigeria’s bustling area in terms of business and commerce. Despite its small size in terms of land area, Lagos is known as the second most populous state in Nigeria just after Kano state. In addition, Lagos is known as “No Man’s Land” owing to its rapid economy. Many people of various ethnicities live in Lagos. There are 20 local government areas within the state.

Osun is also among the states located in the south-western geopolitical zone of Nigeria and its slogan is “Land of Virtue”. The state has various universities and educational institutions to its credit. Among them is the prestigious Obafemi Awolowo University. Ile-Ife, which is a significant Yoruba cultural site, is one of the most prominent monuments to the Yoruba-speaking people. The ancient history of Osun State has shown us that it is the origin of the Yoruba race. The city of Osogbo is the capital of Osun State.

Ekiti is also a Yoruba speaking state in Nigeria and its slogan is “Land of Honour”. This state has the highest number of professors in the country and has a population of over 7 million people living in the state.

Ondo state slogan is referred to as “The Sunshine State.” This is one of the Yoruba states where crude oil is found aside Lagos. Ondo state is the major oil producing state in Yoruba land. The state has a lot of buzz because it is home to one of Nigeria’s most popular tourist destinations, known as the Idanre Hills. Aside oil, cocoa as well as timber can also be found in there. The state is divided into 18 local government areas, with the Ijaws and the Yorubas making up the majority of the population.